Besides being the worldwide dominating search engine, Google is known to have its share of various other markets, but where ever and what ever they stick their tail into, it’s usually bound for success and today the industry giant has announced that its dabbling in another field – publishing. 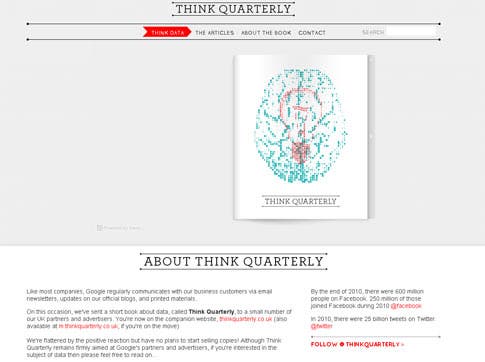 Publishers shouldn’t worry though, as Google is just releasing a commercially free online magazine titled “Think Quarterly“, a magazine destined primarily to Google partners and advertisers in the UK, but available for anyone to read.

“At Google, we often think that speed is the forgotten ‘killer application’ – the ingredient that can differentiate winners from the rest,” said Matt Brittin, managing director of Think Quarterly. “We know that the faster we deliver results, the more useful people find our service.

“But in a world of accelerating change, we all need time to reflect. Think Quarterly is a breathing space in a busy world. It’s a place to take time out and consider what’s happening and why it matters,” Brittin added.
Currently Think Quarterly is at its first edition which focuses on what Google does best – data. The 68-page book leaps right into the impact data are having on business today, and it’s an absolute visual stunner courtesy of the London based design boutique The Church.

It’s not quite an easy read either, feature articles include interviews with Vodaphone U.K. CEO Guy Laurence and data expert Hans Rosling, or Google chief economist Hal Varian and Google director of research Tony Fagan. For the publicity and business enthusiasts, however, Think Quarterly might prove to be stunning in all respects. The magazine is slated to release new editions every few months or so.