by Henry Conrad
in Tech
Reading Time: 4 mins read
A A
Share on FacebookShare on TwitterSubmit to Reddit

Let us make a comparison: 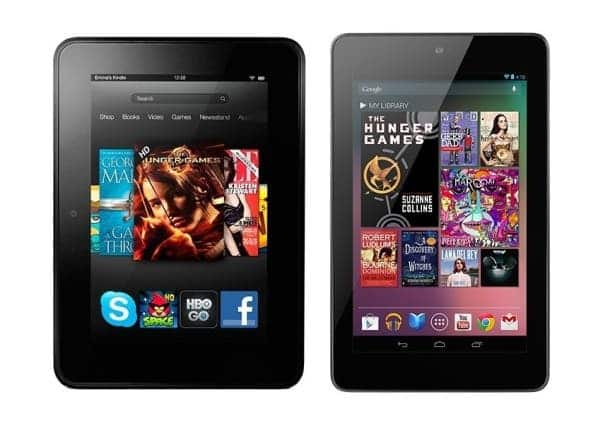 Both the Nexus 7 and the Kindle Fire HD are sporting 7-inch screens with 1280×800 resolution. Amazon boasts that its model has a slightly higher pixel density, but where it really stands out is with the polarizing filter and anti-glare technology.

The Kindle Fire HD wins this round. The early Kindle e-book readers became the staple device for book lovers because its screen has no glare. They have adapted the same principle with their tablets.So if you combine this with their great HD display,you have a winning screen.

You can’t really complain about the construction of each tablet. Both are solid 7 inchers that can be used with one hand. The main difference probably is that Google is thinner and lighter than the Kindle Fire HD at 4.72 inch wide and 11.99 oz.

Google Nexus 7 gets this round but the Kindle Fire HD is not thick and heavy by any means. Both are easy to use and convenient on the hand.

Both the Google Nexus 7 and the Kindle Fire HD sport a front camera designed primarily for video conferencing use. The Nexus 7 has a 1.2MP camera while Kindle HD has an unknown HD camera. Both cameras are not exactly top of the line, but they perform their job adequately enough. It is a tie on this one. Camera, however, is not the strength of either one.

The Google Nexus 7 has a single speaker on its rear while the Kindle Fire HD sports left and right speakers that are found at the edges of the tablet.  Kindle Fire HD wins this category hands down. We tried to make a VoIP call using RingCentral app on the Nexus 7 and the audio was pretty low especially if the tablet is lying flat on a surface. If you buy a Nexus 7, I would advise you to invest in a new headset.

Skin wise, the Nexus 7 might have the more appealing but since we deemed that Kindle HD has the better screen and audio, it just follows that video and other multimedia consumptions are better in it than in the Nexus 7, especially with the catalog that Amazon offer.

Google has a quad-core 1.3GHz Tegra-3 processor, sporting the 4.1 Jellybean OS.  The Kindle Fire HD, meanwhile, has a dual core1.2GHz TI OMAP 4470, sporting a 4.0 ICS OS, of which the UI is heavily tied in to Amazon services. It is kind of unfair to compare the performance of the two as Google Nexus has made it a point to really improve the smoothness of the new Android Jellybean with Project Butter. Benchmark wise, Google Nexus 7 is probably the smoothest running Android tablet in the market especially when you are using the new Chrome browser. Not to say that that Kindle Fire HD is slow, but running on dual core on the ICS is just a step below the quad-core Jellybean powered Nexus 7.

Others things that you should know

Storage wise, both do not include slots for expandable memory. The Nexus 7’s internal memory starts at 8GB at $199 while Kindle Fire HD starts at 16GB for the same price, which could be a factor. The Kindle Fire HD also includes a slot for an HDMI cable while the Nexus 7 does not. Last, Since Kindle Fire HD is tied up to Amazon, you will not have Google Apps and no access to the Google Apps store. You would have to rely on the Amazon store. Meanwhile, Nexus 7 has built in Google apps including YouTube and the Apps Store, though the Nexus 7does not have access to Amazon Video and Lending Library.

It depends on you and your needs. Both are fine tablets and there is room for both in the market. If you are already a fan of the Amazon media ecosystem, then Kindle Fire HD is the tablet for you. If you want a powerful tablet that can multitask and help you organize, plus if you need access to Google Apps Store, then Nexus 7 is for you.