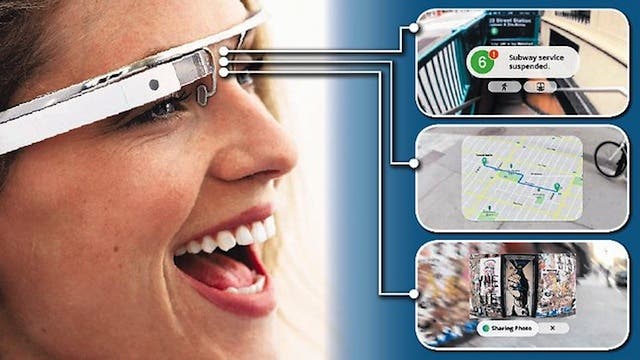 Many people are somewhat unclear on exactly what Google Glass is aside from a new technology platform that strongly resembles eyeglasses.  Google Glass is one of the first computerized facial technologies to be released to the public.  The revolutionary handless eyewear connects to user smartphones via wireless technology when utilizing GPS features, or Google Glass can store all data on a Google Drive via a cloud network.  Different applications can be viewed on a small display in the upper right hand corner of Google Glass hardware.  The initial prototype comes with most applications that are pre-loaded onto smartphones such as text, email, phone, photo, and video recording apps.  Similar to mainstream smartphones, Google Glass is anticipated to be characterized by new and highly innovative applications.

The display for Google Glass is placed in the user’s peripheral vision rather than in the user’s direct line of sight.  The user will look up and to the right in order to clearly see the display which can show images or video of almost anything a current smartphone can.  Some standard images used on Google Glass displays include the following:

Currently, video recording and sharing capabilities are one of the most attractive Google Glass applications.  However, many people speculate that the true value in voice-activated Google Glass technology will be found in future applications.

Glasses that give wearers the capability to go online, talk to friends, and share video data already seem as if they are something out of a science fiction movie.  The core value of Google Glass arguably lies in unique opportunity for app development that can further improve the quality of life for users.  Apps used only on smartphones have limitations when truly combining the real world with the digital world.  Wearable computerized technology can grant individuals greater access to apps that are developed for some of the following purposes:

Google Glass might initially appear as a neat gadget rather than a helpful life tool.  It will be fascinating to see what the software development community can create with the new mobile platform within the coming months.

Google Glass might be available to purchase as soon as late 2013.  Google is currently looking for ways to cut the current $1,500 cost in order to make Google Glass more readily available for consumers.  Those looking to buy glasses online can anticipate doing so for a lower price point by year 2014.

Merging the Real World and the Digital World

A number of concerns about over-integration into the digital world have been raised.  In the end, Google Glass technology appears to be a matter of personal preference.  The extent to which individuals choose to interact with the digital world remains a matter of choice.  And, individuals that naturally embrace new personal technology can purchase Google Glass in the near future.