by Tibi Puiu
in Tech
Reading Time: 1 min read
A A 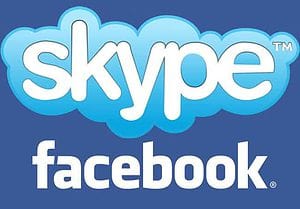 Seeing how Microsoft has a strong relation with Facebook, owning a good lead of shares and famously integrating its search engine Bing into the social network, a real integration between Skype and Facebook seemed like the logical next step in the social game. As such, Facebook is reportedly about to launch a new video chat product powered by Microsoft-owned Skype.

This comes just recently after Mark Zuckerberg’s comments last week, in which among other things claimed Facebook would have an “awesome” new feature to shout about on 6 July. Yes, it’s Skype video chat.

The alleged application that will link the two services, TechCrunch reports, will serve directly from within the browser. It will apparently also come loaded with a desktop component, all pointing at what TechCrunch describes as “deep integration” between Facebook and Skype.

The move comes hot on the heels of the year’s hottest tech acquisition of Luxembourg-based Skype by Microsoft for $8.5bn in May.This wouldn’t be the first time Skype has played the integration game with Facebook. In October 2010 it inked a deal with the company by slotting its “News Feed” and “Phonebook” features into its software.