The latest buzzer in the ever volatile and hype vulnerable social media scene is a promising new start-up called Color, a social photo-sharing app that just recently came out simultaneously for iPhone and Android. Privacy on Color is totally 0, but this is where it actually shines and takes wing in front of the now conventional community driven websites or life stream social networks because how it works is that any photo you upload will appear to anyone else having the app installed in a small radius around your current location. Of course and the other way around, so if you’re at a sports stadium and start your app you’ll be able to see thousands of other impressions and views from the same game. 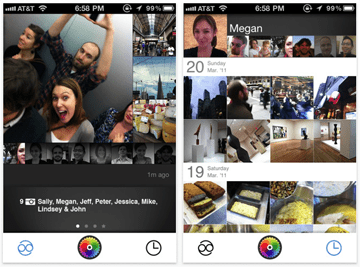 Color’s main pitch to consumers is actually that the app is perfect for social gatherings, and it can be an extremely fun tool to play with at parties. This isn’t a social app though, not in a broad terms anyway, since you wont be able to contact someone who uploaded a photo neither the other way around.

I really love the idea, but for it to work the app desperately needs an enormous amount of users for it build the necessary critical mass. Statistically, if it does work, every place on Earth that matters could have a live pulsating stream of photos.

I’m no start-up guru or VC, but if you look at the people behind the company, you can tell that Color is backed up pretty intensely; Lala.com founder Bill Nguyen (he sold Lala to Apple for $80 mil), former BillShrink CEO Peter Pham, and former LinkedIn chief scientist DJ Patil. Not only that, Color is backed up significantly on the financial side as well, the start-up having already raised $41 million in seed and Series A funding Sequoia Capital, Bain Capital and Silicon Valley Bank.

That’s a heck load of money, a lot of which will probably go on enormous infrastructure and bandwidth bill, and one can only wonder how Color is going to be able to gain ROI out of this. Does it have a business plan?

Ok, who here has tried yet?