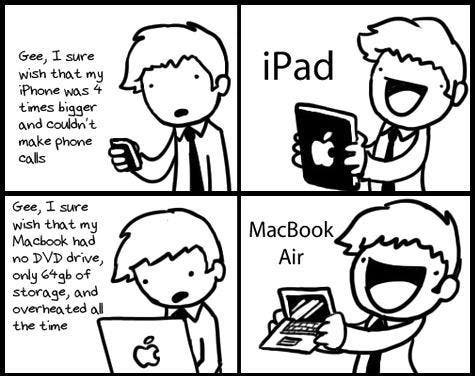 For me, the iPad Mini is the final straw in Apple’s ongoing struggles to market itself as the innovator. Fanboys will no doubt be quick to launch into a tirade about how this just isn’t true, but the rest of us can see it—Apple just isn’t innovating anymore.

How many people do you know have held off on buying an iPad Mini? Comments from my Apple-loving friends range from “I’ll just wait for the Retina version” to “It’s the same old [expletive deleted] where Apple tries to make quick cash off a new product.” Yes, Apple, the iPad Mini is downright crappy, from the size you decided on to the previous-gen hardware you equipped it with. Not exactly pushing any envelopes on that front, eh?

Fanboys have not been hesitant to defend their beloved Apple against this barrage of allegations. There’s the omnipresent excuse of unparalleled design and superb build quality. True enough, Apple really does make a crop of well-designed devices, no matter if they all look alike. It’s a tried and tested visual formula with some tweaks here and there depending on the device, and this approach really works for a wide range of people.

Design, however, is overrated—especially when it’s old and tired as the designs Apple has been releasing and rereleasing these past several years. There’s nothing wrong with that—Macbooks, iMacs, iPhones, iPads, iPods all look great—but when you have millions of devices literally looking the same, it just gets old fast. It doesn’t matter if the handset is a personal device or a RingCentral business phone; you need to differentiate design one way or another—and no, elongating an existing design doesn’t cut it. It should be the same thing with how comic-book lovers hate Same Face Syndrome on the illustrated characters.

Always Late to the Tech Game

Here’s the thing: Can’t Apple simply provide its patrons the best technology has to offer? Must there always be a compromise between design/build quality and specs/power/tech? Why can’t Apple supplement its supposedly unparalleled design with unparalleled technical capabilities as well?

At this point, I believe there is no reason why Apple can’t come out with the best it can offer. Oh, sure, people will say that there’s a reason iOS is always so polished—that it takes time to test and tweak and troubleshoot stuff in and around the OS, especially where it pertains to the hardware side of things. That’s just a load of crap. With all the money Apple makes, there’s no way it can’t get the resources to make the development and testing phases more real-time with the evolution of technology. Plus, if it really does need all that time to get everything as polished as they make it out to be, why have we still witnessed such things as Antennagate and that Maps fiasco on iOS 6?

But it seems the manufacturer is only interested in making money—regardless of what its execs might say—which is why Apple is always late to the game. It was late to bring a bigger screen (and even then, the 4-incher on the iPhone 5 is just as big as the midrange Android phone screens of the past year), it was late to LTE. It will always be late to many of the technologies users in other ecosystems are enjoying, even though we know that the company is capable of doing so much more. But it has to hold itself back, to foster incremental updates and product refreshes so that they can haul in more cash.