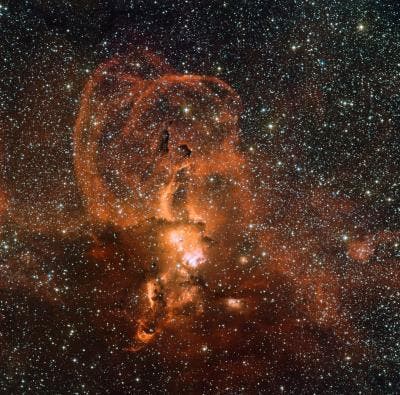 A new image of the nebula NGC 3582, which was captured by the Wide Field Imager on the MPG/ESO 2.2-metre telescop at ESO’s La Silla Observatory in Chile shows giant loops of gas that resemble what you would see for New Year’s Eve; however, there probably isn’t much joy in that sector, as these loops are believed to be emitted by dying stars. What’s interesting is that new stars are also being born in the same area, so this makes it a stellar nursery, as well as a stellar cemetery.

NGC 3582 is part of a large star-forming region in the Milky Way, called RCW 57 which is close to the constellation of Carina. Stars born in that sector are typically much larger and heavier than the Sun, and these giants emit radiation at incredible rates, which is why we get to see this magnificent display of colour, but it’s also the reason why they have such short lived and explosive lives.

The image was processed by ESO using the observational data identified by Joe DePasquale, from the United States, who participated in ESO’s Hidden Treasures 2010 astrophotography competition.