by Mihai Andrei
in Science ABC, Space
Reading Time: 2 mins read
A A
Share on FacebookShare on TwitterSubmit to Reddit 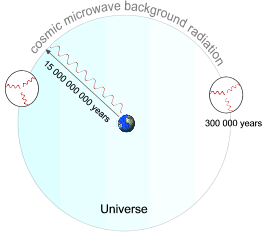 Today’s topic is a bit more complex, but requires only elementary notions to understand. It’s a problems that scientists have had many problems with, to say the least. The truth is despite the fact that there are some solutions that would partially (or even totally) explain the issue, there is no satisfactory explanation to this Big Bang related topic.

Basically, our universe appears to be uniform; look in one part of the universe, you’ll find microwave background radiation filling it, at mostly the same temperature. Look in the opposite direction, you’ll find the same thing. Nothing, so far; but we’ll get to that. You have to keep in mind that nothing travels faster than the speed of light, and this is not about just matter, it’s about physical properties and information too. So here comes the big thing.

The two edges of the Universe are 28 billion light years apart, and the universe is just 14 billion years old, so according to our understanding there is no way that heat radiation could have traveled between these horizons to even out the temperature difference. So the hot and cold spots that resulted after the Big Bang couldn’t have been evened out; but they have. This has given scientists huge head aches, and solutions are just wishful thinking.

The solution that seems to somewhat satisfy scientists is called inflation. Inflationary theory relies on the idea that just after the Big Bang, the universe expanded by a factor of 10^50 in 10^-33 seconds. So this just solves a mistery to give another one.