Curiosity is less than 100 days from landing on Mars, NASA announces

The Curiosity Rover is less than 100 days away from landing on Mars, NASA announced on Friday.

The biggest rover so far, Curiosity has to go another 191 million kilometers, and is currently moving at a speed of 21,000 kilometers per hour; once it arrives on the red planet, it will land near the Martian equator, at the base of a mountain known as Mount Sharp inside Gale Crater. The landing and the first ‘steps’ of the rover are absolutely crucial. 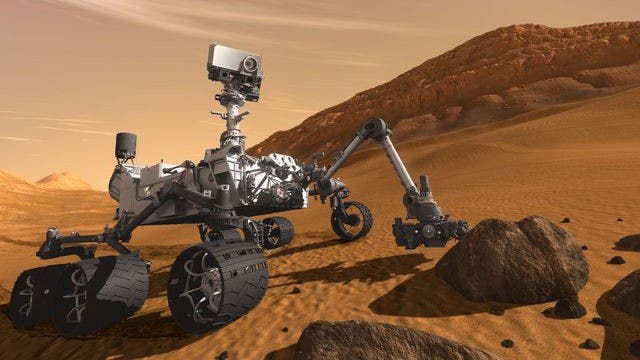 “Landing an SUV-sized vehicle next to the side of a mountain 85 million miles from home is always stimulating. Our engineering and science teams continue their preparations for that big day and the surface operations to follow.” said Pete Theisinger, Mars Science Laboratory project manager at NASA’s Jet Propulsion Laboratory in Pasadena, Calif., in a statement.

Curiosity is practically a laboratory on wheels, and even more, it is the biggest laboratory ever sent to Mars. Curiosity will carry the biggest, most advanced suite of instruments for scientific studies ever sent to the Martian surface, using them to study rocks, soils, and the local geologic setting in order to detect chemical building blocks of life, in order to see if Mars has, or had any life forms on it.