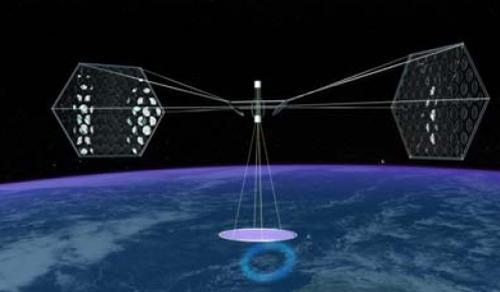 Our planet needs more and more energy as years pass, and the idea that this energy could come from outer space is getting heard stronger and more often with each passing day. For about 50 years people have been fascinated by this idea and now, John Mankins, president of the Space Power Association made a technical demonstration which led to the idea that this project could actually become practical.

Using microwaves and transmitting them from Maui to the nearby Hawaii, he managed to show that energy could be transmitted through all the atmosphere. As you could have noticed from the right side of the site, we promoted a programme, Discovery Channel’s Project Earth which featured some really interesting ideas.

The project that Mankins developed was featured there too, and it took only four months to prepare, costing less than US$1 million. This work brought together specialists from the US and Japan, making it obvious that “it is possible to make real progress quickly, affordably and internationally”. The thing is that solar panels connect just a fraction from the sun’s rays, even in the hot sunny days. Placing them in space would be very different, as a square meter will collect 250 watts. The energy could then be sent back to earth in the form of microwaves, who go through the atmosphere in a way that sun rays don’t. This is where the particular project came up, trying to prove the last part of the idea.

They sent a 20-watt which went to more than 100 kms, but it was not well collimated, as the energy which arrived in Hawaii was less than a watt. Still, the results were promising and further investments would almost definitely lead to a spectacular development. This is what Mankins hopes for too, but he estimates the price at for a 5–10 megawatt pilot plant in orbit in less than 10 years at about $10 billion, using conventional satellite lanchers. Scientists are reserved in what concerns this issue, and it’s absolutely normal to have a rough start, especially because this was a dream even a few years ago. Still, this small step might just be the necessary impulse to make people think more seriously about achieving this goal.

“I think it’s an idea whose time may have come,” says Roger Harrison, director of the Eisenhower Center for Space and Defense Studies in Colorado Springs. “I would be a little sceptical, but I’m more than happy to be proven wrong.”