The Curiosity rover, which successfully landed on Mars and is currently stationary has successfully tested its ChemCam laser for the first time since the descent to the Red Planet. 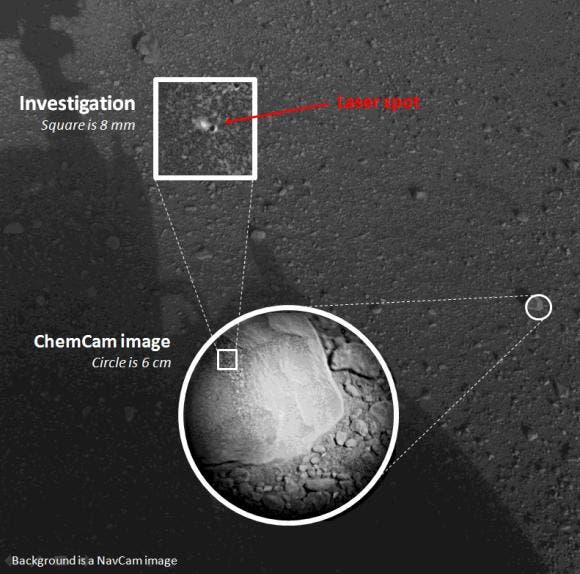 The most important task Curiosity will undertake is figuring out whether Mars is or ever was able to support life – and in order to do this, it will use the ChemCam laser to check the surface composition of interesting rocks and then drill out powder samples for further analysis.

This time, it was mostly a case of calibration and target practice, although scientists ultimately hope to unravel Martian secrets with this method. Everything went out according to plan.

“We got a great spectrum of Coronation – lots of signal,” says ChemCam principal investigator Roger Wiens of Los Alamos National Laboratory. “Our team is both thrilled and working hard, looking at the results. After eight years building the instrument, it’s payoff time!”

Basically, ChemCam ionizes atoms in the rocks, and then, with its three spectrometers, analyzes the glow to figure out the elements from the rock. ChemCam sent out 30 pulses and then analyzed the spectra from all of them, in an attempt to figure out whether the composition changed as the pulses progressed. If it did change, then it could indicate that the laser penetrated dust or other surface material to reveal a different composition beneath the surface. Ultimately, the idea would be finding water or other building blocks of life.

In this Coronation test, not only did everything go according to plan, but the results were much better than initially expected.

“It’s so rich, we can expect great science from investigating what might be thousands of targets with ChemCam in the next two years,” Maurice said.

Three days ago, NASA announced the first destination of the rover – an intersection of three different terrains in the Gale crater; one of those terrains is a classic layered bedrock, which will be subject to some serious testing.

“With such a great landing spot in Gale Crater, we literally had every degree of the compass to choose from for our first drive,” project scientist John Grotzinger, of the California Institute of Technology, said in a statement. “We had a bunch of strong contenders. It is the kind of dilemma planetary scientists dream of, but you can only go one place for the first drilling for a rock sample on Mars. That first drilling will be a huge moment in the history of Mars exploration.”