by Mihai Andrei
in Animals, Science

The elusive millipede species has 750 legs and was thought to be extinct. 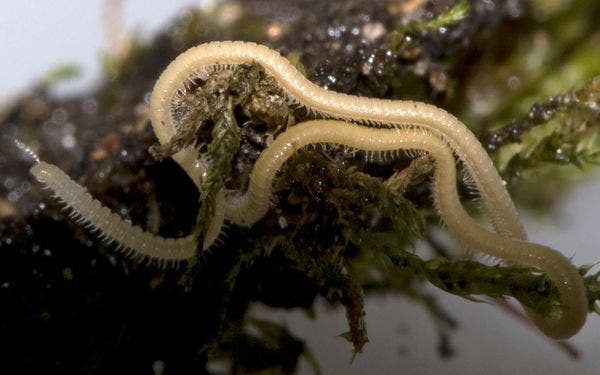 The leggiest creature lives in California – no big surprise there, is smaller than the average pinky and has a really strange anatomy. Aside for the 750 legs sported by females (about 550 by males), they spin silk from long hairs that cover their body, practically creating their own clothing.

“It’s the coolest millipede I’ve ever heard about,” Marek added.

Illacme plenipes has a mythical status in the biological kingdom. It was first observed in 1928, but kept a really low profile throughout the 20th century, which made researchers believe it was extinct. So in 2005, an intrigued Marek, who was then a doctoral student, began searching for the invertebrate, in a foggy small area around San Francisco. He and his team, since then, discovered 17 specimens, each clinging to sandstone boulders; they eventually stopped gathering specimens, afraid that it could endanger the species.

Because this creature has adapted to living underground, it’s not just a set of legs: each leg features claws, used probably for digging or clinging to subterranean rocks. Other surprising features included huge antennae (compared to the rest of the body), which it uses to find its way in the dark, a translucent exoskeleton, and, of course, the body hairs that produce a sort of silk. This is not a fashion statement, but it’s likely something which allows Illacme plenipes to adhere to boulders.

But things are not looking good for them; judging by the ever increasing human development in the area, and their certainly small numbers, they should be considered endangered – and it would be a shame to lose such a bizarre creature.