Why getting a tattoo hurts — the science behind inking

Humans have tattooed themselves since times immemorial to celebrate gods, show social standing, for medicinal purposes or just to look good. And since the dawn of this controversial form of art, people have endured excruciating pain to adorn their body with ink; but why does tattooing hurt so much?

Your leather jacket and motorcycle aren’t enough for you anymore; they fall woefully short of conveying just how much of a badass you really are. This will not do — everyone must see you in all your glory, the world must know. With a spring in your step, you walk into the best tattoo parlor in town, pick out a design that has a dragon with a skull over explosions and roses and chainswords and… OW! Why do tattoos hurt so much!?

Well, it’s because tattoos have to get that ink deep enough that it won’t get washed away but not too deep so it remains visible — the ideal location ends up being right next to your skin’s pain receptors. Given that most modern tattoo artists do this with mechanical tools that push a needle into the skin from 80 to 150 times a second, it’s easy to see how tattooing gets its painful reputation. However, people have endured excruciating pain throughout history to adorn their bodies with ink. So why do we do it? How do we do it? And can we make it hurt less? The short answer to the last question is yes. Here’s the longer answer:

Tattooing is a controversial subject — some are all for it, others consider it an art form to be perfected and some think it’s repulsive. To each his own, but the fact remains that throughout history, tattoos have had (and in some cases still have) deep running cultural and social implications. People around the globe have long marked their bodies to express cultural identity and community status; it is one method to connect to one’s ancestors or gods, to mark rites of passage, or even “wear” a permanent amulet.

The term “tattoo” is believed to originate from the Polynesian “tatau”, meaning “to mark,” and Dictionary.com defines it as being “the act or practice of marking the skin with indelible patterns, pictures, legends, etc., by making punctures in it and inserting pigments.” It’s a simple enough process, but the tattoo’s shapes, colors, and position on the body, taken together often hold an incredibly deep meaning throughout time.

In New Guinea, the swirly tattoos on a Tofi woman’s face detail her family lineage, while in Cambodia monks display religious beliefs etched in ink on their chests. The Japanese Yakuza’s spectacular patterns or the US gang member’s sprawling tattoos can show affiliation, rank, or if the wearer has committed murder. The “Iceman” discovered in the Alps in 1991 was covered in tattoos, 85% of which line up with acupuncture points, says Dr. Lars Kurtak, world-renowned tattoo expert and anthropologist with the Repatriation Office of the National Museum of Natural History.

“He appeared to have terrible arthritis. [The tattoos were] so dark, they seemed to be repeated applications and some of them he could not reach on his own,” he notes.

In some cultures, successfully enduring the excruciating pain and the blood loss of tattooing with primitive tools marks the transition from infancy to manhood and is considered deeply sacred rites, notes Joseph Campbell in his book Primitive Mythology: The Masks of God. So in the end, there are as many meanings to tattoos as there have been human cultures throughout history.

How are they made — and why do they hurt?

Early tattooing involved cutting the skin and rubbing ink in the wound or using needles made of bone or wood to push ink into the tissue; Western civilization’s first recorded encounter with the Polynesian practice of tattooing dates from 1769, when naturalist Joseph Banks traveling the world aboard the British Endeavour witnessed the “extensive adorning” of a 12-year-old girl.

“It was done with a large instrument about 2 inches long containing about 30 teeth,” Banks wrote in his journal. “Every stroke […] drew blood.”

Banks also recounts how the girl wailed and writhed but two women held her down, occasionally beating her, for more than an hour until the tattoo was complete.

Thankfully, tattooing changed since then. Modern tattoo artists use clean, precise units to deposit dye by mechanically driving one or several needles soldered together in and out of the skin, usually from 80 to 150 times a second, like this:

With each prick of the needle, dye gets injected into the skin, and the body’s immune system responds by deploying white cells called macrophages to deal with the threat. Some of the ink gets lost this way, but most don’t — dead macrophages and the ink they didn’t consume is fixed in skin cells named fibroblasts and remains visible through the thin layers of tissue that cover them.

But we know we can get a scratch and not feel any pain or cut our fingers on paper without so much as a blink. So why is tattooing so notoriously painful? Well, it’s all because of where the pigment needs to go to make a tattoo permanent. Let’s look at your skin’s structure to find out why.

Show me some skin!

The skin is the largest and one of the most complex organs in (on?) the body, serving as the soft outer layer of vertebrates; it’s there to protect and delimitate the juicy, fragile “inside” of the organism from the harsh outside.

There are two distinct parts that make up mammalian skin: the epidermis (this is the outer layer of dead keratinocytes that “flakes” off of to be renewed pretty often) together with the more stable dermis (the layer under it that houses all kinds of glands, hair follicles, blood vessels, lymph vessels and sensory cells) forms the cutis. Directly under the cutis lies the subcutis or subcutaneous tissue, where fatty cells are clumped together to protect you from the cold.

The layer where ink needs to be deposited, the dermis, unfortunately also contains receptor cells that send pain signals to the brain to let us know our body is being hurt; it’s not that bad when you prick your toe on a particularly sharp rock, but when your body is being hurt 80 to 150 times a second, they send out a panicked flurry of signals to the brain, making the experience of getting a tattoo rather unpleasant.

On the bright side, since the dermis doesn’t flake off to be renewed like the epidermis, the dye remains embedded in your skin for life. 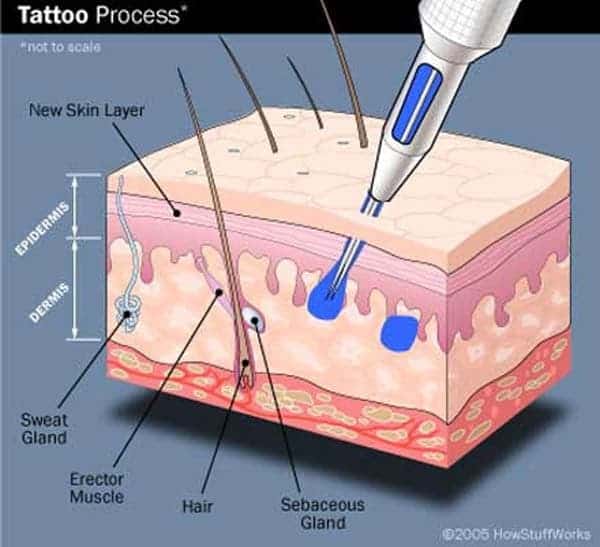 The inks or dyes themselves have also evolved over time; as a rule of thumb, tattoo ink is made up of two parts: a pigment and a carrier. The pigment is the substance that gives the ink its color, while the carrier is a solvent that ensures the pigment is evenly mixed, protects against pathogens and aids application. Throughout time, water or alcohol have been the most widely used carriers, while glycerine and denatured alcohols have started being used in modern tattooing.

Pigments have been made from, well, mostly anything colorful; traditional colors were made with materials like simple dirt, pen ink (yay, prisons), soot, even blood. Modern pigments are derived from heavy metals, metal oxides, liquid hydrocarbons, or carbon. But be warned: red dyes, in particular, are known to cause allergies and swelling for a few months after getting a tattoo.

One of the most spectacular (read: insane) pigment recipes I’ve come across hails from ancient Rome and calls for Egyptian pine bark, corroded bronze ground in vinegar, and iron sulfate to be mixed with insect eggs, then soaked in water and leek juice. The concoction would be rubbed energetically on fresh wounds made with needles or blades to create the tattoo. It bugged me.

It really bugged me.

Now, getting a tattoo is going to hurt, there’s no way around that. But there are some areas that are more sensitive to pain than others; as an empirical rule, if you’re extremely ticklish in an area, getting tattooed there is probably going to hurt pretty bad. While keeping in mind that everyone has a different threshold for pain, Tattoos-Hurt.com has put together a chart showing how sensitive different areas of the skin are to pain:

Secondly, a lot of people think that getting a tattoo while hammered or after taking painkillers will make it easier to handle the pain; don’t be one of those people. Alcohol is a blood thinner, meaning you will bleed more and the ink won’t take as easily. Your constant drunken movements will also make the process take longer and the end result will be lackluster. Also try to avoid Tylenol, Advil, coffee, and energy drinks before your tattoo session, as they have similar effects.

Drinking water is a good idea, as well-hydrated skin accepts the ink more readily, so start drinking as much water as you need a day or two before. Taking breaks also helps, but try to take them sparingly, as the skin will begin to swell a lot more during your breaks and constant starting and stopping will interrupt a lot of the tattoo process and adrenaline build-up.

So if you’re looking to get a tattoo, either to celebrate your religion or to show off your lineage, or to simply some cool new artwork on your skin, now you know why it has to hurt and how you can make it hurt less; you can also pass the time being thankful you’re not getting crushed bug eggs rubbed into your wounds. Happy inking!