Waterless Urinals: Saving Water And Money From Going Down the Drain

More than 160 billion gallons of water are flushed down the drains each year due to urinal usage.

by Contributing Author
in Science
Reading Time: 3 mins read
A A
Share on FacebookShare on TwitterSubmit to Reddit

More than 160 billion gallons of water are flushed down the drains each year due to urinal usage. That’s as much as 700 liters per urinal per day! A switch to waterless urinals can pay for itself in as little as one year and even more quickly in municipalities that offer rebates for their installation. Such economic advantage is enough to make the change seem an obvious choice. There are, however, many additional advantages to using a waterless version of urinals in place of their conventional counterparts.

Health & Hygiene
Despite the long-standing association between a flush of water and the freshening of urinals, eliminating the need for water actually allows these urinals to have fewer odors and makes them easier to clean. With a sealed waste water outlet, waterless urinals prevent the possible escape of the unpleasant odors that can arise from sewer lines. They also eliminate the need for a flush handle, a common means for spreading bacteria to hands.

Waterless urinals support less bacterial growth than conventional urinals: without moisture, bacteria simply can’t thrive. Urine leaving the body is normally sterile and does not support bacterial growth until it is exposed to air and water in urinals and toilets. In a waterless urinal, a streamlined design directs moisture to the urinal trap. This minimizes air exposure and pooling of urine, which keeps both the urinal, and the air around it, fresher. Special odor-eating components that can be included in the urine trap reduce the scent of any stray urine. 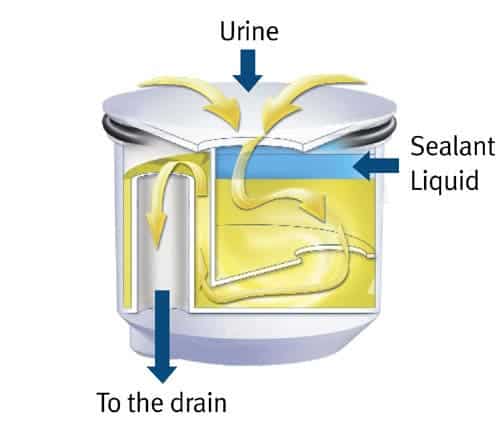 Rather than depending on a flush of water, these urinals allow urine to enter the waste water system through one-way or liquid sealed valves. The one-way valves open only when urine flows over them. Some even include a kind of self-cleaning property due to small pressure differences that ‘flush’ the valve clean with each use. Liquid sealed values allow urine to seep through the oil blocking the outlet, making use of the difference in densities between the two fluids.

Due to fewer parts and simpler operation, waterless versions require less maintenance than conventional urinals. With few parts to repair or replace, reduced maintenance costs further increase the economic advantage of going waterless. The only attention they require is replacement of the liquid sealants after every 1500 uses, or approximately two to five times per year. Some designs require simply adding more oil. This may take the form of simple cooking oil or, in other cases, oils specially crafted for use in these urinals. Other designs include sealant cartridges that can be returned to the manufacturer for recycling. Cleaning involves simply wiping the bowl with an all-purpose cleaner as needed.

How it looks
Waterless urinals are designed to be compatible with existing urinal infrastructure, further facilitating the transition to the new designs. Their appearance can be quite similar to the old familiar forms with the notable lack of flush handle and no need to attach to a water inlet pipe. Just as with any toilet fixture, a full range of designs (and prices) is available that can be installed in both public buildings and private residences.

Why it matters
Conservation of fresh water is an important part of environmental protection. For the safety of both humans and the planet, reducing the amount of potentially potable water that is used for purposes other than drinking and bathing presents an important means for proper use of the Earth’s resources. Much attention has been focused on developing low-flow toilets and shower heads to meet the demand for fresh water. Waterless urinals are the shining-stars in this endeavor as they are no-flow!

Such strives in environmental and economic conservation has nabbed the attention of some government agencies. Since 2010, all new U.S. military facilities have used only urinals with a waterless design. The San Diego Public School system made the switch in 1997 and many more large public spaces have followed suit since then.

Urinal design has come a long way since the first “upright flushing apparatus” of 1866. The plethora of advantages now offered by waterless urinals makes it worth the switch and an essential component to future building projects.