Into the minds of those who can literaly see time

It's all in their 'mind's eye' of course, but make no mistake -- it's all very vivid.

by Tibi Puiu
in News, Psychology
Reading Time: 4 mins read
A A
Share on FacebookShare on TwitterSubmit to Reddit 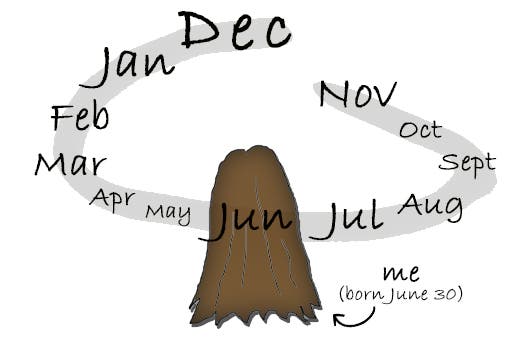 When some people get one sense stimulated, they involuntarily experience this stimulus in another sense. For instance, hearing a car horn causes some people to see the color green. This weird sensory process is called synesthesia, and you’re likely familiar with it. Pop culture glorifies synesthesia, often as a metaphor used to convey the transcendence of the senses.

There are actually 54 forms of synesthesia, like color-graphemic synesthesia in which letters or numbers are perceived as inherently colored; the familiar sound-to-color synesthesia and, possibly the weirdest of all, the time-space synesthesia.

What happens is these people feel like units of time have a corresponding physical reality. Simply put, they can literally ‘see time.’ Here’s how Holly Branigan, a researcher at the University of Edinburgh, describes her synesthesia:

“For me it’s a bit like a running track. The track is organised around the academic year. The short ends are the summer and Christmas holidays – the summer holiday is slightly longer. It’s as if I’m in the centre and I’m turning around slowly as the year goes by. If I think ahead to the future, my perspective will shift,” Branigan told the BBC, describing a rough 3-D circle that surrounds her body and comes in her line of view whenever time organization is conjured.

The time circle is surprisingly common among the synesthetes. Psychologist David Brang from Northwestern University has been studying synesthetes for many years. He says these subjects have time-space synesthesia because they have extra neural connections between certain regions of the brain, allowing them to experience time as a spatial construct.

One of his study subjects, for instance, could see the year as a circular ring surrounding her body that rotates clockwise throughout the year. The current month, complete with the schedule, rested inside her chest, while the previous month floated in front of her chest.

It’s all in their ‘mind’s eye’ of course, but make no mistake — it’s all very vivid.

Brang’s volunteers were asked to visualize the months of the year and draw this representation on a computer. Four months later, they were shown a blank screen and asked to select the position for each of the months, as they previously drew them. They then were presented with a random cue, such as the position of one of the months in the calendar. Four of the 183 students then placed their months in a distinct spatial array, a circle, that was consistent with the initial trials. These four were clearly space-time synesthetes.

In a second test, Brang asked the subjects to memorize an unfamiliar spatial calendar and reproduce it. The space-time synesthetes far outperformed the others at this task, which wasn’t surprising given that their skill is correlated with a fantastic spatial and temporal memory. On average, people with synesthesia can remember 123 different facts relating to their lives, while a regular person can remember only 39.

In another study published in 2006, researchers from the University of Waterloo presented participants with a computer screen where the word “January” was traced right at the center. A small square then appeared somewhere on the screen, and each participant had to press the “spacebar” as soon they could detect it. The group of synesthetes could identify the targets much faster than the control group of non-synesthetes owing to their unique mental mapping of that particular month. This was all involuntary, subconscious.

Having synesthesia might seem like a lot of fun, but there are some downsides to it. There is evidence that suggests space-time synesthetes are more prone to develop Hyperthesmic Syndrome, which involves an inability to forget even the smallest details about the events of one’s life.

If you think you might synesthetic, there’s an online questionnaire you can complete to find out here.