What are the pros and cons of solar energy? Here’s everything you need to know

Using solar energy to meet your power demands does not only make you more environmentally friendly, it may actually save you money.

Using solar energy to meet your power demands doesn’t just make you more environmentally friendly — in many parts of the world, it may actually save you money as well. It’s a win-win situation, but only if you’re in it for long-run. Of course, the viability also depends on where you live, since how much energy your panels can harvest and consequently save you money depends on constantly changing factors such as time of day, season and weather, as well as geographic traits such as climate and latitude.

With this in mind, consider these pros and cons of solar energy before making a purchase.

Solar power systems still generate some emissions and pollution during their manufacturing process. However, during their operation, solar panels do not generate additional greenhouse gases that warm the atmosphere. Once your solar power system is set up, you can live comfortably knowing that your home isn’t making a negative impact on the environment. This means that overall, solar is a much cleaner alternative to conventional sources of energy.

Solar power is also renewable, meaning it will never run out. Fossil fuels like coal and oil, on the other hand, are depletable. In the case of oil, at least, experts forecast it will run out in a couple of decades. By hopping over to solar, you’re hastening society’s transition towards renewable energy.

Pro: You Can Save a Lot of Money

This is one of the main advantages. When you use solar energy, you rely less on utilities to give you electricity. Consequently, your monthly bills go down, and you can even earn a credit on your statement. Electricity companies also pay customers for using panels for the extra energy they don’t use in a month, so you make money (in some countries, at least).

According to a report by the North Carolina Clean Energy Technology Center, backed by the SunShot Initiative, a fully financed solar PV system costs less than the energy purchased from a residential customer’s local utility in 42 of the 50 largest cities in the United States.

Pro: Improves the Value of Your Home

According to recent studies, a property’s value increases after solar is installed, as many people would love to move into a solar-powered home without actually going through the hassle of installing a solar power system. Know this, it’s a lot easier to make the decision of investing in solar knowing that you can actually turn a profit if you choose to move to a different town.

Pro: They’re Quieter than a Heartbeat

Solar panels make no noise whatsoever since they don’t contain any moving parts unless you order a PV array with a rotational axis that follows the sun throughout the daytime. Even then, however, the noise and nuisance are barely noticeable.

Another alternative energy source, wind turbines, might make noise because it is like a large fan blowing in your backyard. This is partly the reason why wind turbines are mostly located near farms or other remote locations because there aren’t many residences nearby to complain about the noise.

The cost of installing and maintaining solar energy panels is high in the beginning, but for areas that aren’t able to receive electricity the traditional way, adding these can be a huge benefit. Some areas are remote and off the grid, so electric companies cannot add a grid matrix to install electricity. These areas use the solar power so that they might use devices such as a microwave, washer and dryer, and the Internet. In some states, it’s debatable whether or not solar can beat the grid in terms of cost, but as far as remote off-grid locations are concerned, solar almost always beats a diesel or gas-fired generator.

Con: They may be Expensive to Install

While you save money by using less electricity, you spend a lot of money upfront buying solar panels. The bigger your energy needs, the more your cost is, and you can spend tens of thousands of dollars. The government can give you credits for adding solar panels, on the bright side. And some providers are actually offering interesting ways to fund your PV installation, so you don’t need to invest a massive initial capital to get going. Depending on where you live and your payment plan, your energy savings could equal your monthly payment. Also, thanks to advances in energy conversion and manufacturing, solar panels are cheaper than ever. According to Lawrence Berkeley National Laboratory, the median cost of a residential solar project fell from $12 per watt in 1998 to $4.70 per watt in 2013. EnergySage reports that the average cost of a 5-kilowatt rooftop system in the third quarter of 2014, before incentives, was as low as $3.70 per watt. In 2018, most homeowners are paying between $2.71 and $3.57 per watt to install solar. As you can see, solar energy is becoming cheaper year after year.

Using the U.S, average for system size at 6 kW (6,000 watts), solar system costs will range from $11,380 to $14,990 (after tax credits). For some, it makes sense to install now, for others perhaps you have to wait. Check out the calculator below to learn where you fit.

Here’s how much a solar power system will set you back on average in the following states:

Note that these are power system prices after the 30% federal tax cut for solar is applied. The price include cost of solar panel, storage, and installation. Source: Energy Sage / Solar Pricing Table 2018.

Con: It Might Not Work so Well in Your Area 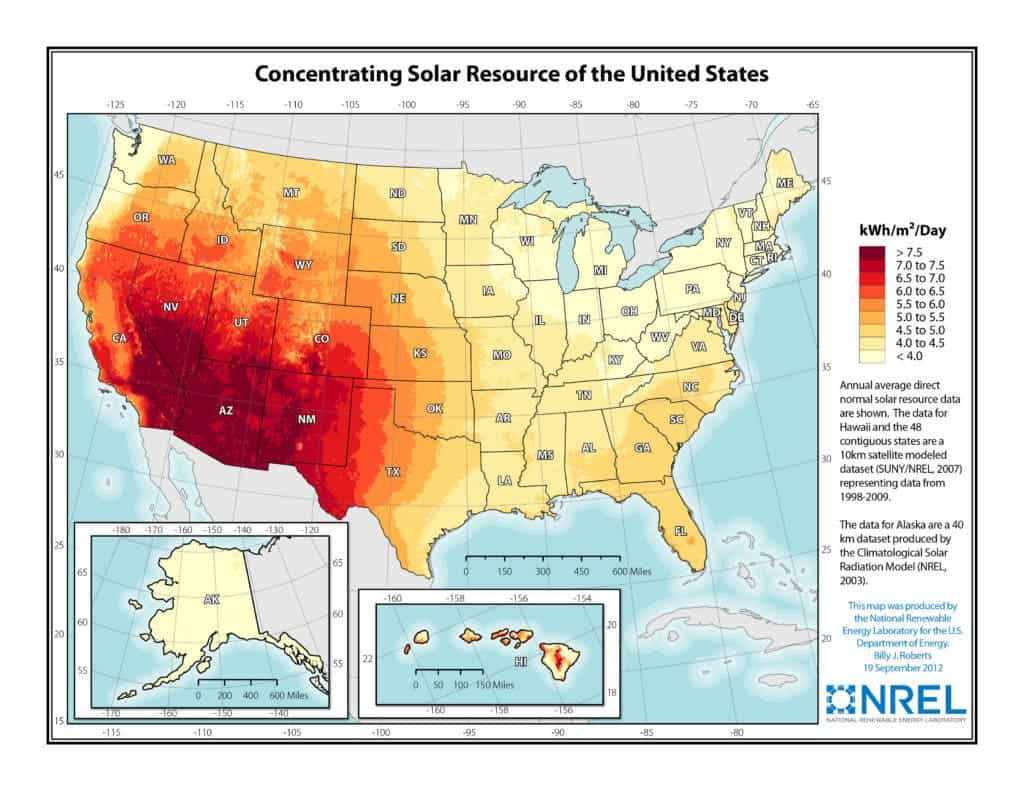 Areas closer to the equator have far greater potential for producing solar electricity than those closer to the poles, and areas with consistent sun have greater solar potential then areas that are frequently overcast. Luckily, most of the United States has a great potential for solar energy, as you can see in this map of global solar radiation from the United Nations Environment Programme. For the absolute best solar resources in the United States, think southwest.

New Mexico and Arizona are red hot with solar potential, and California, Nevada, Texas, Utah, and Colorado also have large areas highly favorable for PV development. If you live in one of these states, consider this point as a “pro” on your checklist. Also, another point you should consider is air pollution. Using solar power, you disconnect from the grid, thus generating less demand which is generally met by coal power plants. In effects, this ultimately reduces pollution. But if you’re living in a polluted area in the first places, you’ll experience poorer performance than otherwise because black carbons spewed by power plants combine to form haze and smog. These greatly reduce the amount of available sunlight by blocking the sun. In 1985, Atsumu Ohmura discovered that the amount of sunshine on Earth had dimmed by 10% between the 1960′s and 1980′s.  In addition, over the past 50 years, the average sunlight reduction was 3% per decade.

The more energy you use, the more space is required in order to host more solar panels. Solar panels are great because you can install them on your home’s rooftop, without the need for any additional space (apart for the batteries in a garage, for instance). However, if you’re really burning a lot of energy, the rooftop might not be enough.

Solar energy works during cloud and rainy days but its efficiency drops significantly. Just a few cloudy or rainy days could have a noticeable effect on your energy bill’s bottom line. Most importantly, solar energy cannot be collected during the night, which forces you to install batteries to store energy.

You use solar energy during the night hours thanks to batteries charged during the day. These batteries run from a few hundred dollars to over $1,500 and weigh from 60 to 420 pounds. You also require a place to store them that will not get wet and damage the battery, as well as buy accessories such as a cord and replaceable cells, which you’ll have to replace every 15 to 20 years. Consider, however, that now we have Tesla batteries! The list price for a new 13.5-kilowatt-hour (kWh) Tesla Powerwall 2.0 battery, which offers twice the storage capacity of the original Powerwall, is $5,900. Supporting hardware adds another $700 to the equipment costs, bringing the total to $6,600. Installation can add anywhere from $2,000 to $8,000 to the final bill.

Because Tesla Powerwalls aren’t available to the mass market yet, you’ll have to settle for other commercially available alternatives. In 2018, solar batteries range from $5,000 to $7,000 and from $400 dollars per kilowatt hour (kWh) to $750/kWh, cost of installation and additional equipment not included.