Some of us like to think that the energy needs of the future will be supplied by clean and renewable energy sources, but a recent report released by the Manhattan Institute for Policy Research leads us through the mist and shows a cruel reality: coal, the dominant energy source in the world today, will continue to be the prime fuel of choice up until the next 25 years at least. If there’s anything we’ve learned since Thomas Edison used coal in the first central power station on Manhattan’s Pearl Street in 1882 and from contemporary state of affairs – a general consensus that climate change is real and must be avoided, yet nothing actionable is undertaken – then coal, in all likelihood, will remain the main energy supplier for the next 50 years as well.

ZME Science often reports the most recent developments in renewable energy technology and policy. We don’t hide the fact that we have a bias towards renewable energy, for solid reasons, we like to think. Yes, it’s not the cheapest energy source (coal takes the mark, and we’ll get back to our crown prince shortly), but if you add the costs of global warming (health hazards, drought, floods etc.) then switching is also economically viable in the long run. Some countries know to take a hint. Germany already meets half of its energy needs using solar, and Denmark wants to phase out coal completely from its energy picture by 2025. 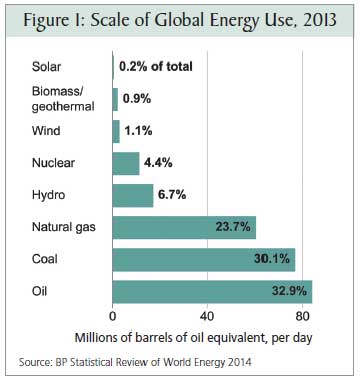 In  2013, global wind-energy output was up 21 percent, while solar grew even faster, up by 33 percent last year. It may seem like we’re on the right track, yet worldwide the two (solar+wind) barely account for ~1.5% of total energy production, while demand is rising faster than non-hydro renewable installation can keep up. It’s all a pipe dream, it may seem, and the Manhattan Institute report is one hell of a cold, acid-water shower.

Since 1973, coal consumption has grown faster than any other form of energy. Yes, this pattern has lost its acceleration slightly in the past few years, with 2013 seeing its lowest growth yet – only 3%. In absolute numbers, though, this means coal use rose by about 50 percent more than the growth in petroleum and nearly three times the growth seen in natural gas – and we’re talking about other fossil fuels here. Concerning non-hydro renewables, coal use since 2003 has grown  nine times faster than the growth seen in wind-energy consumption and 40 times that of solar energy. The report reads:

“Coal, which now accounts for about 40 percent of all global electricity production, will likely maintain its dominant role for decades to come. Electricity-poor countries, along with those that are electricity-rich, are currently building hundreds of gigawatts of new coal-fired electricity-generation capacity. The nine countries discussed in this paper—China, Germany, India, Indonesia, Japan, Pakistan, Poland, Russia, and South Korea—are planning to build about 550 gigawatts of new coal-fired capacity over the next two and a half decades. The vast majority of that, some 400 gigawatts, is planned for China. Given the coal industry’s recent history and the ongoing surge in global coal use, there is little reason to believe that any of the much-discussed international efforts to impose a cap or tax on carbon-dioxide emissions will prevail. Furthermore, given the ongoing increase in global coal use—along with the fact that the U.S. has more coal resources than any other country—it makes no sense for U.S. policymakers to restrict the use of coal in America.” 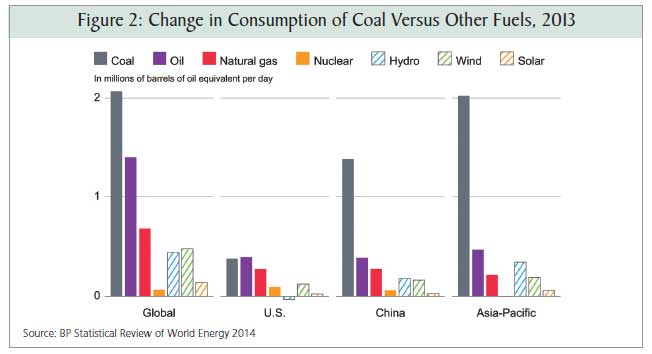 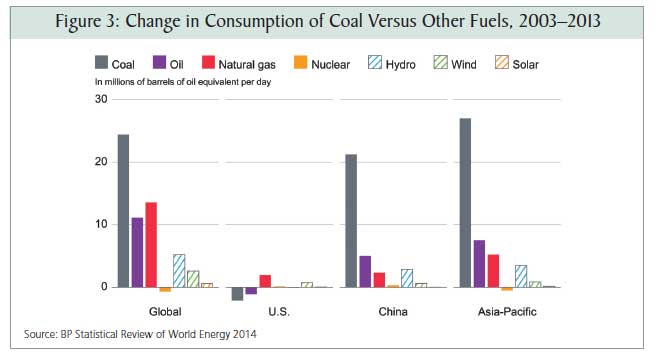 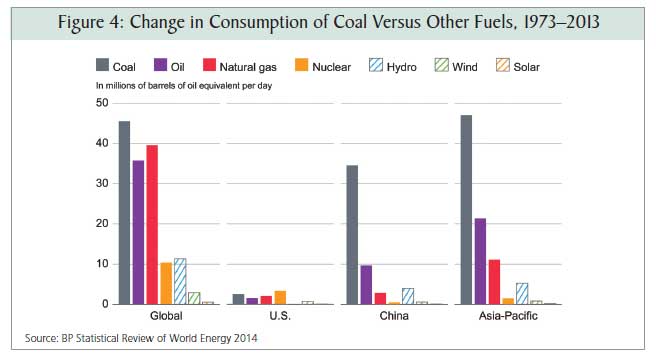 And the key findings are:

In other words, who the heck are we kidding here? The latest IPCC report on climate change is due tomorrow and, as always, the authors will rant on how we need to tackle our emissions, how much the Arctic ice has melted, how many species are going extinct every year, how the consequences of our insatiable drive for fossil fuel will cause worldwide turmoil by 2100 the likes humanity have never seen and so on. Rant they will, no one’s listening. 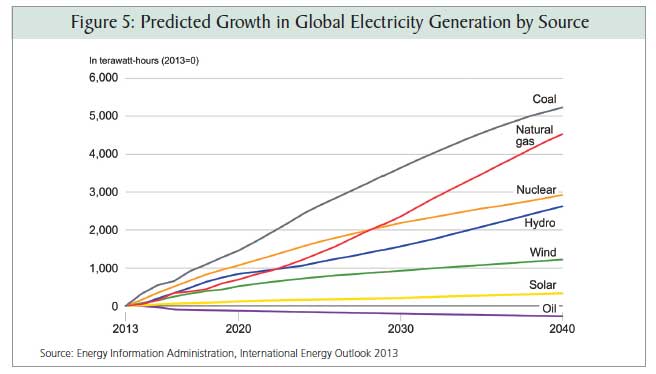 Yes, the EU just agreed to cut CO2 emissions by 40% until 2030, while at the other end of the ocean, the EPA set 30% less CO2 until the same target year (it’s needless to remind you that the US is the world’s largest polluter per capita and that its emissions have actually risen past 1990 levels). Developing countries are catching up, though, and they’re electricity generating means are almost exclusively reliant on coal and they have all the right to do so. What sane person would deny access to electricity, be it from coal, oil or natural gas, when the developed world has risen through these very means? 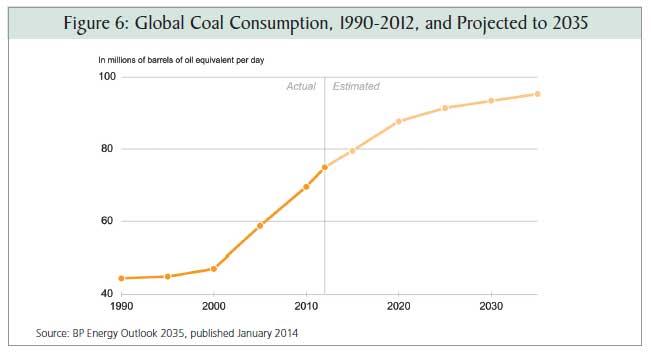 But it’s too easy to blame it on the developing countries (even though some miss the point: they’re entitled to burn as much coal as they want!). Because it shut down eight of its nuclear reactors, Germany will compensate by adding some 7.3 gigawatts of new coal-fired power plants online by 2015. In May, Russian electricity giant Inter RAO said that it was considering construction of an 8-gigawatt coal-fired power plant, whose primary customer would be China. If built, the plant would be the world’s largest of its kind, surpassing the 5.5-gigawatt Taichung plant in Taiwan.

Coal use is on the rise, but does that mean we should applaud it? NO!

Personally, I feel the findings reported by the Manhattan Institute for Policy Research are dreadful, yet the authors seem keen on slapping a savior allure to coal. “Look how much the world has grown, look how many people have risen out of poverty thanks to coal”, is what the report sounds like over and over in my head. Really, they’re like a broken record. Coal is the cheapest form of energy out there (on average, in some places in the world renewables are far more cost-effective), but that doesn’t mean we should push it full force.

“No-one doubts that carbon dioxide has increased in the earth’s atmosphere profoundly over the last hundred years. Almost everything else, however, is in doubt. Do greenhouse gasses make the earth warmer? It’s hard to say because eighty percent of the increase in carbon dioxide in the atmosphere followed, but did not precede the increase in the surface temperature that has been measured over the last hundred years. If it caused the increase in temperature, it’s an odd pattern of causality, where the cause follows the effect.”
Source: Transcript, The 2000 Annual James Q. Wilson Lecture: “Public Policy and the Media: Do We Get the Whole Story?”

Allow me the benefit of a doubt in taking anyone seriously who talks about climate change and energy, but receives hundreds of thousands of dollars in funding for Exxon and a  $1,575,000 grant from the Koch Brothers (i.e. the Manhattan Institute for Policy Research, of course). Backers of the Manhattan Institute would love nothing more than their projections to sound true, but what if something happens in the meantime? I’ve seeded doom and gloom in this post – I admit – but all is not lost.

So, there you have it – coal: the world’s energy crown prince. In all its splendorous and shiny, tar coated armor, is here to stay for decades. ZME readers, now’s your turn. What’s your take?