by anon
in Geology, World Problems
Reading Time: 1 min read
A A
Share on FacebookShare on TwitterSubmit to Reddit 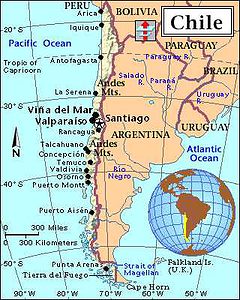 According to USGS, on Friday, February 11, 2011 at 20:05:31 UTC a 6.8 magnitude earthquake struck the offshore Bio-Bio region, very close to where last year’s magnitude-8.8 quake spawned a tsunami and devastated coastal communities. In the following hours, a dozen aftershocks ranging from magnitude-3.9 to magnitude-6.3 shook the seismically active area.
Skyscrapers swayed in the capital of Santiago, and in the inland town of Cauquenes, mothers ran into the streets carrying babies in their arms, as stated by Yahoo News.
Fortunately, no tsunami was formed as in the last’s years mega quake and the communities were better prepared for the hazard. The 8.8 magnitude earthquake last year killed more than 500 and produced massive devastation in all the cities near the coast.
So…why no tsunami this time? It seems there is a huge difference in strenght between the two big earthquakes, the 8.8-magnitude quake being about 800 times larger in terms of energy released, said Natan Becker, an oceanographer at the Pacific Tsunami Warning Center. After all, magnitude is measured on a logarithmic scale.
The Chile region was hit by 10 earquakes with more than 6.5 magnitude only in the last 10 years, so we can only hope they use the latest technology advances to increase the level of safety.