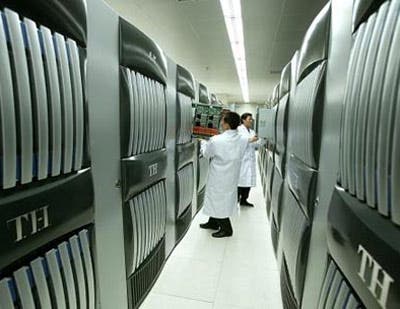 In the kind of event that seems to happen more and more often, China stole America’s top spot for the world’s fastest supercomputer, with the Tianhe-1A PC. It has a whopping sustained speed of 2.507 petaflops per second, and theoretically it can go up to 4.7 ! What’s a petaflop you ask ? A petaflop is the equivalent of 1000 trillion calculations so Tianhe can do 2 507 trillion calculations per second – that’s something !

The computer has no less than 7,168 M2050 graphics cards from Nvidia, at a cost somewhere around 2500$ each, as well as 14,336 processors from Intel. Why does this matter so much that the government would be willing to spend these enormous sums of money ? Well, it all comes down to good old fashioned national pride. China just wanted to be the big daddy in the supercomputer area, and boy did they raise the bar ! Still, it can be extremely useful in areas such as bio-medical research, media analysis or even the animation industry.

The previous record holder, the American Jaguar has a sustained speed of 1.75 pentaflops per second and is housed in a laboratory in Tennessee. The Jaguar has been the king of supercomputers since 2004, when “he” knocked down his Japanese adversary, but the crown is about to change it’s owner once more. It’s supercomputer eat supercomputer world out there.