Why some creatures in the deep sea grow to enormous sizes

Deep sea gigantism (or abyssal gigantism) is the tendency for deep-sea animals, mostly invertebrates, to grow to much larger sizes than their shallow water relatives. But what causes animals to grow so much, and what giant animals can we find in the deep sea? Let’s have a look.

When Jacques Piccard and Navy Lieutenant Don Walsh reached dove to a depth of 10,911 metres (35,797 ft) in the Trieste Bathyscaphe, they came in contact with a whole new world. The descent to the ocean floor took 4 hours 47 minutes, and when they finally reached the bottom of Earth’s deepest point, they were shocked to see some species of fish (sole and flounder) casually swimming around. Since then, we’ve learned and discovered much more about deep sea life, but it still feels like we’re only scratching the surface. Biologists still aren’t certain why some abyssal creatures grow to such immense sizes, but they have some good theories.

You’d think that if anything, deep sea pressure would keep animals smaller, and not larger, but the water pressure isn’t much of an issue, because the creatures are mostly water themselves, and water is not very compressible. In fact, the buoyancy of the organism is what allows them to grow so large – they don’t need to fight gravity. But still this explains how they can become so huge, and not why.

Two general rules seem to dictate this growth: Kleiber’s rule and Bergmann’s rule. Kleiber’s rule states that animals that are bigger are generally more efficient. A cat for example, having a mass 100 times that of a mouse, will have a metabolism roughly 32 times greater than that of a mouse. Kleiber’s law, as many other biological allometric laws, is a consequence of the physics and geometry of animal circulatory systems. It also has a lot to do with surface area to volume and the fractal nature of blood vessels. Huge animals swimming in the depths of the oceans rely on food to drop from above, and food is often scarce, so they have every incentive to become more efficient – and therefore larger.

Bergman’s rule is a general correlation of increasing body size with decreasing temperature. Populations and species of larger size are found in colder environments, and species of smaller size are found in warmer regions – but this is tendency more than a rule. For warm blooded animals this happens because the bigger you are, the less area you have in contact with the surrounding environment compared to your volume. But for animals swimming in the sea, this is correlated to cell division and increased life span. But there is some debate regarding this rule, and other factors also contribute to the body growth.

Now that we’ve seen the main (proposed) causes why some animals grow so much deep in the oceans, let’s look at some examples.

In 1977, scientists in the DSV Alvin discovered black smokers (hydrothermal vents that look similar to the video of the Deepwater Horizon gusher) off the Galapagos Islands. Today we know that these hydrothermal vents create entirely new and unique ecosystems – ecosystems in which creatures like the giant tube worm can survive. These worms can reach a length of 2.4 m (7 ft 10 in) and their tubular bodies have a diameter of 4 cm (1.6 in).

You’d think that crabs just hang around in shallow waters, right? Well, you’d be wrong. Adult Japanese spider crabs can be found at depths of over 6,000 meters, and they can reach immense sizes, up to 12 meters from claw to claw. Specimens that weigh almost 20 kgs were found. 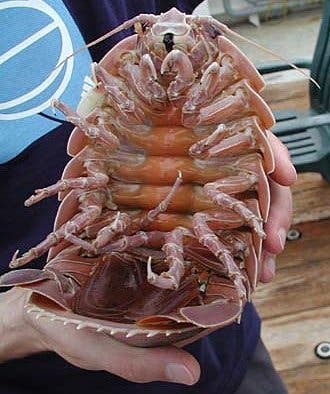 Giant isopodes are abundant in the cold deep waters of the Atlantic, Pacific and Arctic oceans. Giant isopods are a good example of deep-sea gigantism. While generally, isopodes reach between 8 and 15 centimetres, these giant species can reach a maximum weight and length of approximately 1.7 kilograms (3.7 lb) and 76 centimetres (30 in) respectively.