A brief incursion into the world of cognitive machines, authored by IBM's head of research.

by Tibi Puiu
in Books
Reading Time: 5 mins read
A A
Share on FacebookShare on TwitterSubmit to Reddit 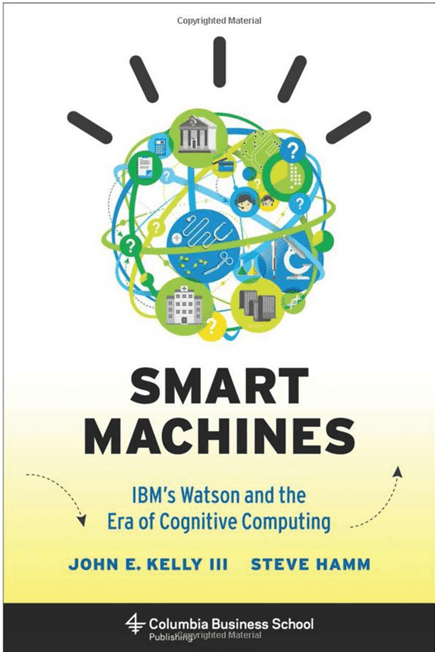 In 1996, IBM’s Deep Blue supercomputer became the first machine to win a chess game against a reigning world champion, a position held at the time by Garry Kasparov. Fast forward to 2011 and IBM had a new super toy playing a grownups’ game – Jeopardy! The new supercomputer, called Watson, was introduced on prime time television to tens of millions of people, culminating years of painstaking work and showcasing the most advanced machine that employs artificial intelligence and natural-language processing. Emotions filled the studio, but Watson was not impressed. On a faithful February evening, Watson bested two past grand champions and set a new milestone in computing.

In the first rows, you could find John E. Kelly III, director of IBM research, who along with Steve Hamm, a writer at IBM, wrote ‘Smart Machines: IBM’s Watson and the Era of Cognitive Computing’. More then just a broad backstory on Watson, the book explores the fascinating world of cognitive machines – truly intelligent computers, based on a novel architecture that can learn by doing – and how this exciting technology might transform the world. First of all, it’s important to note that Watson is yet to reach this status. Both Watson and its predecessor, Deep Blue, are computers based on traditional von Neumann architecture comprised of zeros and ones. While these machines have demonstrated extremely impressive capabilities, both are equally limited in scope. Deep Blue had millions of playbooks mapped and it could compute moves much faster than any human, yet chess is a finite game, as stressed by game theory. Watson shined through its encyclopedic knowledge and lightning quick recall ability, yet again this is all it could do. Because their fundamental architecture is the same, these computers still work, in principle, the same way primitive versions did 50 years ago: they can only do what they’re programmed to do.

Chess is not a game. Chess is a well-defined form of computation. You may not be able to work out the answers, but in theory there must be a solution, a right procedure in any position. Now real games… are not like that at all. Real life is not like that. Real life consists of bluffing, of little tactics of deception, of asking yourself what is the other man going to think I mean to do. And that is what games are about in my theory. — John von Neumann

Enter the world of machine learning and cognitive computing, which the book faithfully explores. The two authors take turns explaining how Watson development will one day lead to veritable thinking machines that participate in dialogue with human beings, navigate vast quantities of information and solve extremely complicated, yet common problems. These systems will be able to learn from both structured and unstructured data, discover important correlations, create hypotheses for those correlations, and suggest actions that produce better outcomes. One important field where such smart machines will be employed is medicine. Kelly and Hamm describe, for instance, how Watson has already been fed some 600,000 pages of medical evidence, 2 million pages of text from 42 medical journals and clinical trials, and several thousand case histories. Now, researchers are working on the hard part: making Watson capable of inductive reasoning, so it doesn’t just do what it’s told, but also figures out what to do on its own. “The goal isn’t to replicate human brains, though. . . . People will provide expertise, judgment, intuition, empathy, a moral compass, and human creativity,” the authors write.

For instance, Watson would be contacted through an interface by a physician who wants to learn more about a specific patient and how to apply a customized treatment. Watson would automatically retrieve personal information and medical records about the patient, then, on request, the machine will present the physician with a slew of treatment options, ordered by confidence of success. This is invaluable information today, since there are so many specific cases where general treatment doesn’t work. Let’s say a Japanese-American woman has lung cancer; an oncologist assisted by Watson would be informed that women from Japan who are nonsmokers are fairly likely to have a mutation in a gene, EGFR. If this is the case, a certain drug shrinks the cancer by 95%. Watson suggest a test, along with other tests, again ordered by confidence and based on experience (the more cases Watson is exposed to, the more he learns and leans toward the right decision). Big data is ubiquitous nowadays, and more and more information is being gathered and processed every day. Smart machines will help us navigate through this sea of bits (and why not qubits) and transform the stock market, computing (see the TrueNorth neurosynaptic chip), the internet and even the way citizens interact with cities.

“The new era of computing is not just an opportunity for society; it’s also a necessity. Only with the help of smart machines will we be able to deal adequately with the exploding complexity of today’s world and successfully address interlocking problems like disease and poverty and stress on natural systems,” Kelly and Hamm write.

The book offers a highly entertaining look on how this technology might change society, but it doesn’t necessarily explain how we’re going to get there. The writing is essentially rounded towards laymen, and if you’re looking for some technical details on how cognitive computing works, this book isn’t for you. At times, I felt a bit annoyed that the book speaks too much about IBM developments and so very little about things happening outside of IBM. We all know IBM is at the very forefront of this type of research, but the future of cognitive machines won’t entirely belong to them and most certainly they aren’t the only ones working on cognitive systems in the present. Still, far from giving the impression that ‘Smart Machines: IBM’s Watson and the Era of Cognitive Computing’ an oversized IBM marketing brochure, the book does a good job at introducing cognitive machines to the uninitiated reader.