Book review: ‘The Federal Reserve and the Financial Crisis’

The 2008 financial crisis explained by the Federal Reserve chairman. 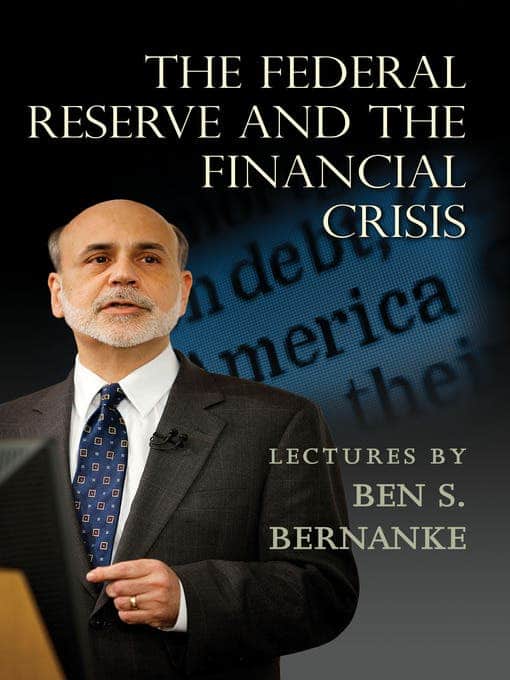 In 2008, the real estate and stock market crashed triggering the worst financial crisis, worldwide, since the Great Depression. The wealth of the average American fell by 18%. But these were all just part of a great chain of events, which can be traced back to excessive credit and complex security buying schemes. In 2012, Ben Bernanke, the US Federal Reserve chairman at the time, gave a four part lecture at the George Washington University on the role of the Federal Reserve in the economy. His insightful lectures were transcribed and edited in the form of a book, “The Federal Reserve and the Financial Crisis”.

Let me start of by saying that Bernanke found himself is a most unfortunate position, as chairman of arguably what’s the world’s most important central bank during times of great economic distress. Because of this, some of his decisions were bound to be controversial and boy, oh boy were they some. Invoking an emergency, he used the Fed’s legal power to loan more than a trillion dollars and bail out the big sharks in the financial system, like AIG or Bear Sterns. The whole book seems to explain the rationale behind this controversial move, and he firsts starts off by summarizing how and why the Fed Reserve was founded a century ago, why they got rid of the gold standard and so on. This serves to build a context for Bernanke to argue that the Fed’s measures taking during the 2008 crisis were all in line with the central bank’s historical and traditional role: as a stabilizer through monetary policy (regulating short-term interest rates), financial policy (limiting the risks players in the financial market may take) and, most importantly in this context, as a lender of last resort.

The lender of last resort as been one of the fed’s greatest tool, according to Bernanke. If it was used to halt bank runs and panic during the great depression, in 2008 it was used to bailout major financial institutions which were “too big to fail”, as in their financial crash would cause ripples that would severely shake the real economy. This made him extremely unpopular among the general population, especially considering millions of Americans found they couldn’t finance their mortgages anymore and/or their property values were under water. Who was going to bail them out? Obviously, I don’t think any banker in the world would have wanted to be in Bernanke place.

Granted, the bailout what not made with tax payers’ money and it actually turned more than two hundred billion dollars in profit, which went straight to treasury. So, not bad at all, but the real controversy surrounding bailout itself was that ruthless, unconscionable financial institutions, like AIG, were saved. They took major risks, and the Fed’s just bailed them out. It’s extremely unfair.

Nevertheless, Bernanke stresses that what they did was necessary. He reasons this by first dispelling myths concerning monetary policy and what the Fed can and cannot do. What I found impressive however, was his transparency. He effectively admits that they were ill prepared and that the “too big to fail” situation should have never happened – yet it did. Never again, stresses Bernanke and in his lectures he details what steps the Federal Reserve has taken to both curve the crisis and make sure too big to fail will never happen again.

Ben Bernanke might have been one of the most important chairman in US history. Some hate him, others appreciate his work greatly. Effectively, he may have averted the 2008 depression from turning into a second Great Depression. You can argue, however, that he didn’t take the necessary action to avert it from happening. Whatever the case, objectively at least, this is an extremely useful book, especially to monetary neophytes like myself. I learned so much about the Fed, the crisis, the financial market. Say what you want about Bernanke, but he is one great teacher.