Book Review: ‘Before You Know It: The Unconscious Reasons We Do What We Do

A book for everyone interested in knowing more about the human mind. 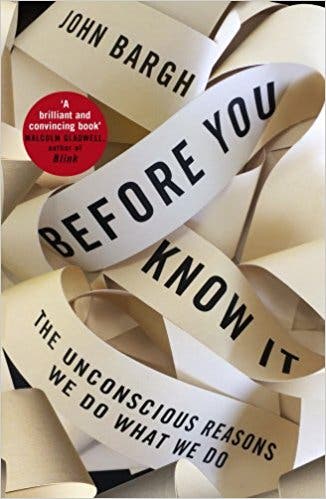 Before You Know It: The Unconscious Reasons We Do What We Do
by John Bargh
Touchstone, 352 pages // Buy on Amazon

Why do we do the things we do, what lurks beneath our sense of awareness, and what does a Led Zeppelin fan have in common with the human brain? Before You Know It does a lot to answer these questions, and it does so in style.

The human brain is quite possibly the most complex object known to mankind. While we still can’t claim to truly understand it, we have come a long way, understanding at least some of its surprising intricacies.

Yet despite this complexity, the book still manages to maintain an accessible and pleasant approach to describing the human brain. To me, that’s an important part of what separates the good science books from the excellent ones — and Before You Know It certainly shines in this regard. It presents even the most complex bits of science in an engaging, reasonable language, and it also does a great job at not oversimplifying things, which is often the trade-off in books like these.

You could hardly find a better writer for this type of book. John Bargh is a highly respected social psychologist currently working at Yale University who’s dedicated his life towards understanding what behaviors are a result of our own will, and what behaviors come as an automatic response to external stimuli. He takes us through a number of pivotal experiments and trials. Bargh’s own creative and thorough experiments played an important part in advancing social psychology.

However, within the realm of this particular branch of science, not all is clear. Historically, replicability issues have plagued social psychology, and Bargh himself has not been spared from such issues. So Before You Know It shouldn’t necessarily be regarded as the be-all-end-all of conscious and unconscious behavior, but rather as a collection of thorough, modern, and scientifically sound pieces of evidence — many of which will certainly surprise you.

Let’s take a phenomenon called stereotype threat — a situation where people who are subtly made aware of a stereotype against them tend to actually behave according to that stereotype. In other words, if the world has a negative impression of you and you’re made aware of that fact, you tend to fulfill that negative impression — which can be particularly problematic, as many such stereotypes are instilled in us since childhood. For instance, a study found that girls feel that they are weaker than boys at maths even before starting school!

I found myself fully immersed in these stories, wondering just how much of my own behavior is influenced by or as a result ofsuch effects.

Before You Know It isn’t a book only for specialists. It’s the type of book everyone can — and if I’d dare say, should — read. It will not only get you up to speed with over a century of active research and take you on a rollercoaster of paradigm shifts, but it will also help you better understand other people — as well as yourself.