Researchers used certain telltale signs of lying from over 120 high-profile court cases to teach an algorithm how to spot the best liars. U

Researchers used certain telltale signs of lying from over 120 high-profile court cases to teach an algorithm how to spot the best liars. Unlike a polygraph that infers truthfulness based on physiological parameters like heart rate, respiration and body temperature, the software developed by University of Michigan researchers makes use of visual cues only, the kind that a FBI profiler might use.

After feeding hundreds of hours worth of video footage into the software, the researchers noticed some patterns. Those who lied in court  moved their hands more, scowled or grimaced, said “um, ah, uh”more frequently, and attempted to create a sense of distance between themselves and their alleged crime by using words like “he” or “she” rather than “I” or “we.” Liars were also more likely to look questioners in the eye, instead of looking away, and spoke more slowly. Liars were considered those who were found guilty in court, which make it inaccurate in the case of a wrong conviction. It does, however, seem to be a better sampling pool than the alternative: a lab setting.

In a lab setting, it can be difficult to assess liars. “The stakes are not high enough,” said Rada Mihalcea, a professor of computer science and engineering at UM-Flint. “We can offer a reward if people can lie well — pay them to convince another person that something false is true. But in the real world there is true motivation to deceive.” 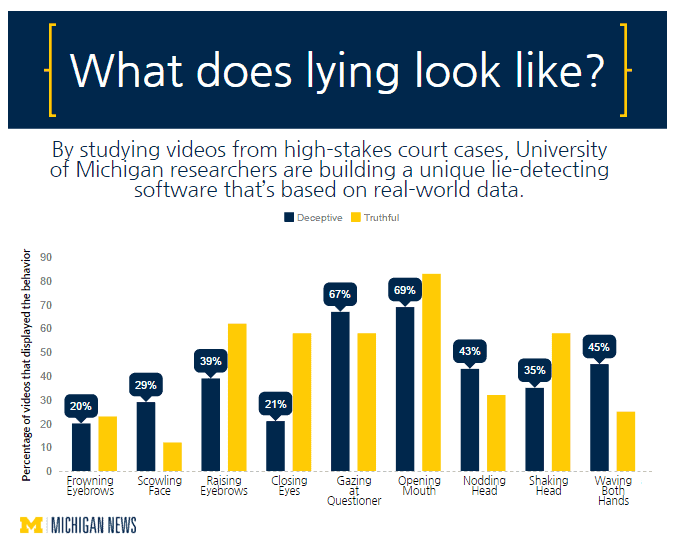 During trials, the software was able to identify liars 75% of the time, compared to 50% in the case of humans (complete random). Next, the researchers plan on integrating more data — again in a non-intrusive way. They’re thinking about using thermal imaging cameras to integrate physiological factors, including heart rate, respiration rate, and body temperature — just like a polygraph sans all the wires. This would help improve accuracy, while at the same time avoid stirring panic. A lot of polygraph tests send off false-positives simply because the interviewed person is too nervous.

Of course, you could never use this as evidence in court. You’d need 100% accuracy, and that’s not possible. Instead, law enforcement could find this sort of software very useful during profiling and questioning so they can improve their workflow and filter out suspects better.

The paper can be found here.