I can see it in your eyes…

by anon
in Other, Studies
Reading Time: 2 mins read
A A
Share on FacebookShare on TwitterSubmit to Reddit 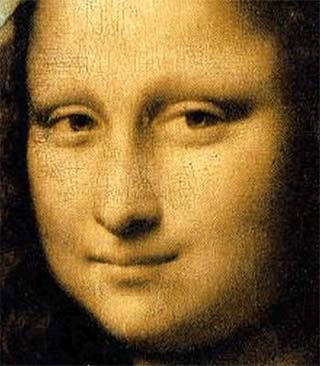 Just when the DaVinci Code craze seemed to be long over, some members of Italy’s national committee for cultural heritage state that they have discovered a code in Mona Lisa’s eyes. Magnifying high-resolution images of the world’s most famous painting would reveal hidden letters and numbers added by Leonardo Da Vinci, said Silvano Vinceti, president of the Committee.
Harder to decode are the letters writen in the left pupil. CE, B, 72 or just L2? The researchers don’t seem to see the same thing here. But if the DaVinci Code fans are thrilles, the scolars aren’t.

“I can’t offer any comment on the scientific value of this ‘finding’ since the scientific basis to support it are missing,” Carlo Pedretti, the world’s leading scholar in Leonardo studies, told Discovery News.

The other problem is that the numbers cannot be seen on the magnified picture, but only on high resolution photos of it, but as some seem to be inlove with the portait, others try to find more scientific explanations for her famous smile.

“Attempts to solve the enigma around her smile, described by the 16th century artist and writer Giorgio Vasari as “more divine than human,” have included theories that the noblewoman was happily pregnant, suffering from asthma, had facial paralysis or that the smile was the result of a compulsive gnashing of teeth.”

She also seemed to suffer from hypercholesterolemia, an inherited cholesterol disorder. But until the researchers agree on her diet and other hidden messages she send us, we can only hope for a chance to see the work.