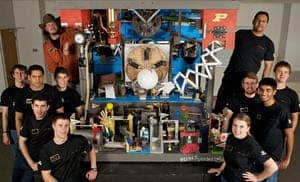 Everybody enjoys a good ol’ entertaining Rube Goldberg machine, whether it’s a fantasy Loony Tunes contraption or a real-life state of the art display of engineering. What’s not to love when alarm clocks, sprockets, furniture and even boiling tea pots all work together in a lovely dance, ultimately ending in lighting a candle or something along the lines whose simplicity comes in white/black contrast with the assembly’s intricacy? This year, the Purdue Society of Professional Engineers team beat its own record after they built, yet again, the largest Rube Goldberg machine in the world, as attested by the World Records Academy.

Consisting of 300 steps, the machine flawlessly accomplished the simple task of blowing up and popping a balloon. The team spent more than 5,000 hours constructing the machine that accomplished every task ever assigned in the competition’s 25-year history, including peeling an apple, juicing an orange, toasting bread, making a hamburger, changing a light bulb, loading a CD and sharpening a pencil.