Recently, a team of scientists has created a new metallic material which they claim to be the lightest in all the world, not even coming close to styrofoam or aerogels, and even making carbon nanotubes seem heavy. 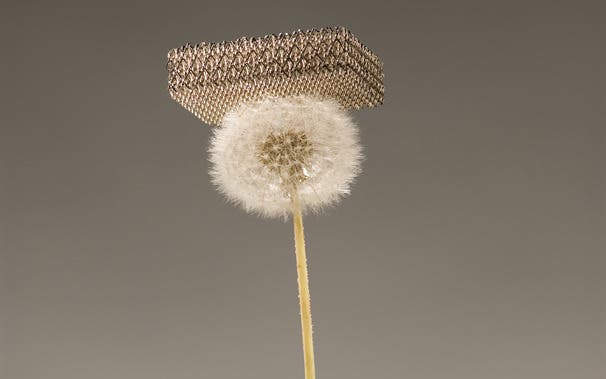 This lightest material has an estimated density of just of 0.9 milligrams per cubic centimeter (mg/cc), compared with carbon nanotubes, which come at 1.3-mg/cc; it was designed as a joint effort by researchers from HRL, CalTech and the University of California, Irvine. This metallic material is practically made of hollow tubes just 100 nanometers across that are formed in a micro-lattice process; it is 99.99% open volume (air), and perhaps the most interesting fact about it, it is extremely shock absorbent. If you were to crush it even more than halfway through, it would just bounce back to its initial size and shape.

This technology of lightest material was developed with a horde of applications in thought, including “battery electrodes, catalyst supports, and acoustic, vibration or shock energy damping”, but if you ask me, it could be used in so much more than this, including impact technology, saving laptops or phones, earthquake management, and so on.