by Andrey
in Discoveries, Other
Reading Time: 2 mins read
A A
Share on FacebookShare on TwitterSubmit to Reddit

Belive it or not, there are still regions of the world left uncovered and unexplored. One of these, up till now virgin, territories, is a small region in Peru’s Amazon Rainforest region, where a very tall new waterfall has been discovered. Discovered, however, is an awkward word, because the waterfall’s existence was well known by the indigenousness population living there, but because of fear of damaging the region, they chose to live in silence. 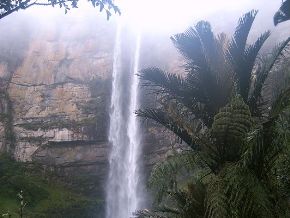 The waterfall was discovered by local explorer Obed Cabanillas Silva, and is considered to be the tallest in the country, higher than the magnificent Gocta Waterfall which is 771 meters (2529 feet) high and located in Chachapoyas, northern Peru. The Gocta Fall is, officially, the third tallest waterfall in the world, surpassed only by Venezuela’s Angel Falls and South Africa’s Tugela Falls. (pictured: Gocta Waterfall)

Worth noting, that Peru’s Gocta Falls was also discovered recently, in 2005, much in the same manner of this latest one. Local residence there also feared the area might be damage and kept their mouth shut as best as they could, until it inevitably revealed itself to the world. Sad or not, On 13 March 2006 the Peruvian government announced to the press, published on that date by La República, that the area surrounding the falls would be developed as a tourist attraction, with a target date for sometime in mid-2007. This latest waterfall is likely to suffer the same fate.