by Bala Murali Krishna Yelchuri
in Health & Medicine, Research, Technology
Reading Time: 2 mins read
A A
Share on FacebookShare on TwitterSubmit to Reddit

Hyderabad, Dec 6, 2011: Here is good news for heart patients who require stents to open their clogged arteries for free flow of blood. 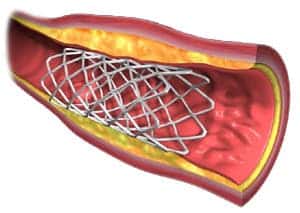 One need not have the feeling of a foreign device embedded in your coronary artery as is the experience of patients after having metallic stents, ordinary or drug-eluting, implanted in a surgical procedure.

Thanks to the invention of a new generation device that could be permanently absorbed in our body after it does its intended job.

The device, world’s first drug-eluting “bioresorbable vascular scaffold” has been successfully tried on more than 500 patients with Coronary Artery Disease(CAD)  in the world, so far.

Developed by the global healthcare company Abbott, the device “ABSORB EXTEND” will further be tried on 1,000 patients in about 100 centers in Europe, Asia Pacific, Canada and Latin America. It was tested clinically in four centres in Canada itself.

The device is made of polylactide (PLA), a proven biocompatible material that is commonly used in medical implants such as dissolvable sutures. PLA is a biodegradable thermoplastic substance derived from lactic acid. It is used for making compost bags, plant pots, diapers and packaging.

The latest success story is reported from Canada’s  Montreal Heart Institute (MHI) which had treated a woman in her sixties with CAD under the leadership of  Dr. Jean-François Tanguay, interventional cardiologist and coordinator of the Coronary Unit, as part of the ABSORB EXTEND clinical trial.

“This successful intervention was a first in North America. This breakthrough could change the lives of patients. The woman, diagnosed with a severe lesion to the heart main artery, responded favorably to the procedure. She was discharged after 24 hours and now, one month after, had regained a normal way of life with no more chest pain,” the doctor said.

“Once the vessel can remain open without the extra support, the bioresorbable scaffold is designed to be slowly metabolized until the device dissolves after approximately two years, leaving patients with a treated vessel free of a permanent metallic implant.

With no metal left behind, the vessel has the potential to return to a more natural state. After the device has been metabolized, the patient’s vessel is free to move, flex, pulsate and dilate similar to an untreated vessel,” the doctors claim.

“Treatments for coronary artery disease have progressed tremendously from the days of balloon angioplasties and metal stents leading to improved clinical outcome in our patients,” says Dr. Tanguay.

Also an associate professor of Medicine at the Université de Montréal, he adds,”By effectively opening up a blocked artery without leaving a permanent implant behind in the blood vessel, this bioresorbable vascular scaffold has the potential to revolutionize how we treat our patients.”