by Mihai Andrei
in Biology, Research, Science
Reading Time: 1 min read
A A
Share on FacebookShare on TwitterSubmit to Reddit 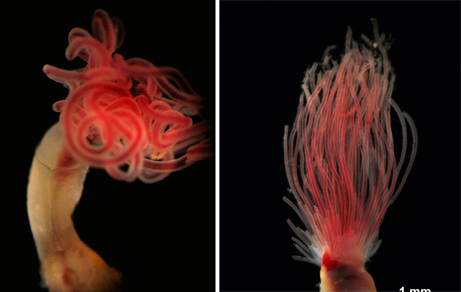 Scientist Ana Hilário plans to name at least one of these worms after the mythological creature, due to the resemblance with the Greek monster. Hilario is a researcher at the University of Aveiro, in Portugal.

She discovered 20 species of these tiny undersea worms called frenulates, in some mud volcanoes located near the Gulf of Cadiz, southwest of Spain. Mud volcanoes have the energy to support fluorishing ecosystems.

This energy is tightly linked to the fluids very rich in methane that seep from the seafloor. Still, scientists don’t know that much about these frenulates (which you could have guessed from the fact that they discovered 20 new species); however, they do know that they are able to survive due to a certain bacteria that lives in a special organ inside their bodies.

What happens is these worms absorb the methane, which they don’t need, and then transport it via blood to the bacteria; the bacteria is able to transform the methane into an organic substance (despite the fact that it cannot absorb it on its own), and thus, both are fed and everybody is happy. Ana already named another worm bobmarleya, due to the seemingly dreaded hair.