by Shane Jones
Reading Time: 3 mins read
A A 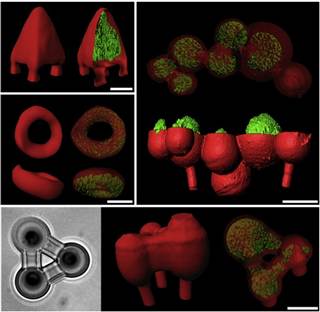 While 3D printing at the consumer level has mostly been a novelty, the applications in the medical community have been exceptionally exciting.

A certain type of 3D printer, where it would typically extrude plastic layer by layer to create a three-dimensional object, can now be used to extrude gelatin instead, creating breeding grounds for bacteria. It sounds like a John Carpenter movie just waiting to happen, but the implications are extremely exciting for those in the scientific world.

Scientists have been attempting for quite some time to understand the social nature of bacteria. While they are suspended in colonies, they are capable of communication between themselves, and even with members of other species. This communication – or sociability, if you will – is thought to be a driving force behind their ability to become resistant to antibiotics over time. In other words, bacteria seem remarkably able to compare notes and collaborate in order to survive.

The bacterial colonies created in the 3D printing process can take many shapes, including pyramids and spheres. This whole process is an attempt by scientists to answer longstanding questions about bacteria, such as how many of them have to be clustered together, and in what shape and size, to allow the colony to start behaving differently together than the cells would on their own.

As we alluded to above, there have been some extremely exciting advancements made possible by 3D printing, though very few of these have reached the public yet. Scientists from the University of Edinburgh have even created a printer that can replicate human embryonic stem cells. The possibilities are staggering.

The study of harmful bacteria looks to be every bit as promising. Scientists are now able to better understand biofilms – that is, the ability for bacteria to “cement” themselves together with a gluelike substance, which makes them more resistant to antibiotics or even the human immune system than they would be individually.

Particularly troubling are the biofilms that plague the lungs of those suffering from cystic fibrosis. To date, there has been a measure of success treating this condition with antibiotics, but there has so far not been a treatment that’s been successful at eradicating 100% of the offending bacterial biofilms. What this means is that the patient must endure a cycle of treatment and infection that is not only physically detrimental, but possibly deadly. Fully understanding harmful bacteria and their biofilms could prove critical in understanding cystic fibrosis and similar diseases, and in developing treatments that work decisively the very first time.  The same applies for drug addicts, and the ability to correct some of the biofilms that result from the chemical reactions of say Methamphetamine could reduce side effects as well as help addicts speed up their meth detox timeline.

The 3D printing procedure looks like something out of science fiction. The bacterial cells are added to a gelatin mixture, creating something that looks startlingly like a dessert. From there, researchers use a laser to carve around the suspended bacteria, linking the gelatin to the bacteria permanently, as well as creating pockets where the bacteria can breed freely.

After the bacterial colonies have matured, scientists can add various antibiotics, such as ampicillin, to study how the bacteria react to it. So far, the results have indicated that the bacterial resistance to antibiotics is largely dependent on colony structure as well as the presence of other pathogens in the colony.

As with any 3D printing technology, these procedures are hampered somewhat by the price of the equipment, but there is a great deal of optimism that the prices will come down in the near future. For now, there’s no question that the possibilities are exciting indeed while the scientists of the University of Texas responsible for this discovery work out the litigation rights for the future of it’s release.

Shane is an experimenter and innovator who is passionate about science. Ever since his first astronomy as a kid he's been hooked. His greatest passion is to learn the psychology of happiness. Follow him on Google+