by anon
in Shorties
A A 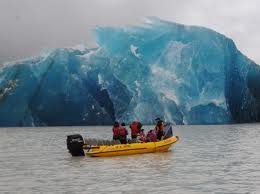 On Tuesday, February 22nd, a 6.3 magnitude quake shook New Zeeland, causing severe damage to major cities on the south island, especially Christchurch.Every year, thousands of earthquakes occur in New Zealand that are too small to be felt. However, in the 15 years between 1992 and 2007, New Zealand experienced over 30 earthquakes of magnitude 6 or more. But one unexpected side effect was a 30 million tonne block of ice sheared off a New Zealand glacier just minutes after the violent earthquake.

It created waves up to three metres high for 30 minutes which rocked two sightseeing boats on the lake at the time.
The enormous iceberg — estimated to weigh 30 to 40 million tonnes — began ripping off the Tasman Glacier at Aoraki Mount Cook National Park accompanied by a loud noise which sounded like a rifle shot, a local tourism official said.
The officials say that the earthquake was only the trigger and that they expected the huge block to fall at one time or another.