by Mihai Andrei
in Inventions, Science ABC
A A 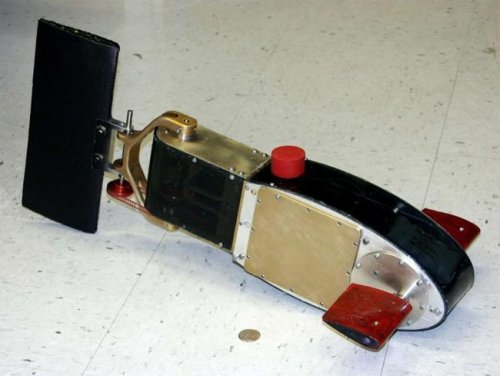 Kristi Morgansen, an aeronautics and astronautics engineer at the University of Washington presented the results of these amazing robofish. These new robots that feature tails and fins passed the test with flying colours.What makes it so amazing? Well, unlike most robots which receive instructions from a scientist or satellite, Robofish (as they are called) rely solely on each other and they work as a team by wirelessly communicating only with each other.

The fish are about two feet long and wiggle through the water by using their fish-like tails and fins. These fins are also a step forward, as scientists claim they are way better than usual propellants, as they produce less drag and noise and allow a better control for the fish taking turns.

Here’s what Morgensen has to say about how the fish “talk” to each other:
“One of them will send a message, and the rest of them know it’s not their turn to talk and so they are listening. There’s a time during which they know there is a signal coming. If they receive it, they use it; if they don’t, they keep following what they were doing.”
“If you have some sort of event going on like an underwater eruption, you’re not going to be able to get one vehicle to a bunch of places quickly and so the more underwater researchers, the better, as long as they don’t all flock to the same location.”