How Quicksand Works and How to Escape its clutches

You trek through a marsh, minding your own business, when all of a sudden *smooosh. Quicksand!

by Tibi Puiu
in Did you know?, Feature Post, Research, Science, Science ABC
A A

You trek through a marsh, minding your own business, when all of a sudden *smooosh. Quicksand! You’re trapped, and to top your misfortune over you’re all alone. No helping friend to come to the rescue with a proverbial twig or stick to pull you out to safety. Well, farewell.

This image, which often comes to mind to most people when they think of quicksand rightfully sounds scary. The only problem is that quicksand is far from being this treacherous or dangerous. People and animals engulfed and lost forever to quicksand happen very rarely. Its density is twice that of the human body, which means that it’s impossible for you to sink — unless you struggle. This part about quicksand is true. Regardless, it’s almost impossible to be killed by quicksand, no matter what Hollywood might tell you.

That’s because quicksand is basically sand or some other very grainy soil that’s saturated with water. In this semi-liquid state, the sand shifts fast, hence “quick sand” and stops supporting weight. Most often than not, clay and salt can be found in the composition.

What quicksand is and how it’s made

Quicksand can appear virtually anywhere in the world if an area of loose sand is saturated by water and becomes agitated. One of the following situations can lead to the formation of quicksand:

While quicksands can be found all over the globe, there are naturally some areas that are more prone to host them like riverbanks, beaches, lake shorelines, near underground springs or marshes.

Quicksand is a shear thinning non-Newtonian fluid which looks like a gel when undisturbed but quickly drops in viscosity once an object rests its mass.

Daniel Bonn of the University of Amsterdam in the Netherlands and the École Normale Supérieure in Paris, investigated what makes quicksand so puzzling: easy to get in, hard to pull out. His research shows that quicksand is highly sensitive to the forces applied to it. Just a 1% change in stress caused the viscosity of the mixture to drop by a factor of nearly a million, essentially turning  the quicksand from solid earth to gooey liquid.

Strikingly, to pull a foot out at a rate of 1 centimeter per second would require the same force needed to lift a medium-sized car, Bonn and colleagues found. Their research, however, puts to rest an old myth about quicksands. “Although you are trapped, you cannot drown,” says Bonn who placed various objects in a quicksand mixture and these never completely submerged.

Quicksand can indeed become dangerous maybe even life threatening if you’re all alone and don’t know how to get out. Then you’re exposed to the sun, cold and even starvation.

How to escape quicksand

Because the water seeps in from the bottom, the top layer of sand is often dry, causing it to look like any normal sand. Until you step on it — surprise, surprise. If you do fall into quicksand, you shouldn’t panic. It’s rarely more than a few feet deep and the worst that can happen, in most situations, is you lose a shoe!

If you ever find yourself trapped in quicksand remember:

2) the harder you struggle, at the worst you’ll get trapped. Try to relax and never flail arms and legs. If you do so, you will only succeed in forcing yourself farther down into the liquid sandpit.

First thing you should do is drop your bags or gear. The less weight you pull, the better. Also, try pulling off your shoes as these create friction when you try to pull out of the quicksand. If you feel it’s impossible to take off your shoes, it’s still ok. If you know you’re trekking through quicksand country, it’s actually better if you walk barefoot and with a walking stick prod the soil right in front.

If you get one foot stuck, try to move backwards. It takes a minute for the sand to become liquefied, so you still have a bit of time left before you get stuck.

If you do get stuck, it’s time to get messy. Imagine you’re in a big pool instead of a quicksand marsh, what do you do to get out? Why, you swim of course. Position yourself horizontally and lean on your back. This will distribute the pressure of your body’s weight more evenly. You’ll start floating. You’re basically going to backstroke yourself out from here. Kick your legs slowly to loosen the sand around them and then try to gently bring them up towards the surface. With your hands slowly paddle with short strokes on the surface, being careful not to submerge the hands else you might get them stuck. Once you’ve paddled to the edge of more solid ground, pull yourself out.

What you should really be afraid of

Quicksand isn’t exactly harmless, but it’s not dangerous either. Aside from getting yourself dirty and losing your shoes or backpack, quicksand is nondeserving of its reputation. That should belong to its much scarier cousin, dry quicksand.

Dry quicksand forms when grains of sand form a very loose structure that can barely hold its own weight, let alone yours. Scientists make it by blowing air through the sand. If an object of meaningful density is dropped on the sand, it will instantly sink and the whole sandy structure will collapse like a house of cards. The show doesn’t stop here. Once this process is initiated, the energy from the collapse triggers a jet of sand whirling upwards. 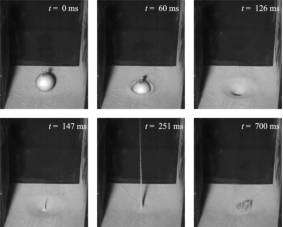 If anyone, man or animal, were to fall into dry quicksand then they’d get buried fast. Fortunately, no dry quicksand has ever been seen in the wild — only in the lab. Scientists, however, don’t discount the possibility of its existence in nature. It could form when desert winds blow to form a patch of dry quicksand on the down-wind side of a dune. In fact, during the Apollo mission days, NASA scientists were so concerned about loose layers of debris, soil and dust on the moon’s surface that they installed large plates to the ends of the lander’s legs.