by Contributing Author
Reading Time: 5 mins read
A A

The birthday of French mathematician, physicist and inventor Blaise Pascal is approaching on June 19th, but as far as the calendar is concerned it’s just another day. Sadly, although his legacy stretches 400 years, Pascal’s relative obscurity is undeniable. The likes of Albert Einstein, Thomas Edison and Leonardo Da Vinci will always be classed as creators who changed the world, but include the name “Blaise Pascal” in the same breath and witness the raised hand and the inevitable question: “Blaise who?”

Looking at the man’s biography, it doesn’t take much sifting to see why his name didn’t make it onto the list of rock-star inventors: Pascal was deeply concerned with vanity, and distancing himself from it at all costs. An untimely death at 39, in 1662, with several of his works unfinished didn’t help matters. So whereas Da Vinci et al. fluidly find their way into contemporary tourism, literature and even pop music, it is mostly hardcore academics who can elaborate at length about Blaise Pascal. Indeed, a short career coupled with an aversion to self-promotion have effectively rendered the French inventor a shadowy figure prone to either being ignored, typecast (as one of philosophy’s biggest pessimists) or else just another name to memorize for an exam. Plus, many of his ideas were so avant-garde as to be met with bewilderment and dismissed (living mathmo Shinichi Mochizuki may empathize) in spite of them cropping up centuries later by someone else’s hand.

If only for the sheer multitude of his inventions alone does 17th century genius Blaise Pascal deserve posthumous recognition: a man whose modesty kept him out of the spotlight, but whose quiet genius secured him in the annals of history. You may be shocked by just how many of Blaise Pascal’s inventions you already know (and use). Read on!

The next time you find yourself searching Google for an online calculator or using your calculator app on your smartphone, spare a thought for the designer of the concept. In 1642, Pascal built the first mechanical adding machine, a rather bulky metal object the size of a shoebox with input dials and output windows displaying numbers. Named the Pascaline, it emerged from years of Pascal witnessing his tax collector father doing long and laborious sums, inspiring a nineteen-year old Blaise to find a solution that would speed up the process with a mechanism of some sort. So off to work Pascal went, creating what most agree is the world’s first successful mechanical calculator.

At some point, your high school science textbooks would have covered Pascal’s Law, the principle on which the modern-day syringe is based: Pressure, when applied to a static contained fluid, will affect all parts of the fluid equally. By maintaining the same force while reducing the area, pressure can be multiplied. A stunningly simple idea that can be put to use by literally anyone with a tube, a couple of weights and some water to spare, Pascal’s Law not only governs indispensable hydraulic machinery such as car brakes, elevators and construction cranes, but also the very syringes that provide 16 billion people per year with lifesaving vaccines.

For those who have heard of Pascal, the two aspects of his career that are the most commonly quoted are his founding of probability theory and the infamous Pascal’s Wager. A third, lesser-known contribution of the French inventor completes the triumvirate of decision-related discoveries: the roulette wheel. Pascal spent quite some time trying to build a perpetual motion machine – a mechanism that could resist friction and spin indefinitely without an energy source, thus challenging two of the established laws of thermodynamics. Incredibly, in 1665, one of his failed attempts was a near frictionless spinning wheel. Little is known of the path this wheel took to becoming the basis for the first official roulette games recorded in 1796, but it is unanimously agreed upon that the prototype was indeed the work of Pascal. The Frenchman may not have managed to invent a perpetual motion machine, but he did invent a very entertaining one.

In 1662, Pascal launched the first public bus service in Paris after securing funding from connections to the French monarchy. The “five-penny coaches” were small omnibuses drawn by seven horses and could fit a handful of travelers, moving along popular routes in the French capital. The coaches proved popular initially, but despite the idea being granted copyright status from the king, it ultimately proved to be a little bit too ahead of its time. Ticket prices gradually went up, social tensions were caused by certain strata of society being ineligible to use them, and after 15 years the public buses came to a crashing halt. It would be another three centuries before bus services would return to Paris. 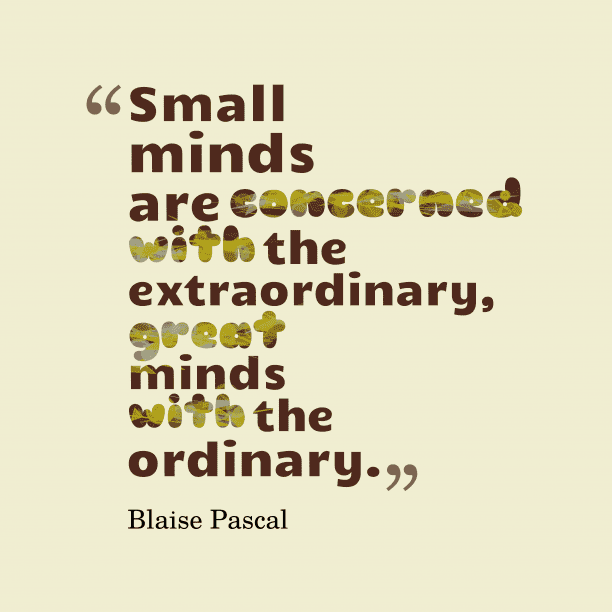 Aside from being skilled in science and philosophy, Pascal’s talents also extended to literature. Bad health prevented him from writing a grand treatise on religion, so he diligently recorded his vision of the world in a series of notes that he called Pensées or “thoughts.” What is less known is that he also wrote a series of satirical letters, named the Lettres Provincales, as his alter ego Louis de Montalte. The eloquent and acerbic prose would later influence household French writers such as Voltaire, and as critic Russell Goulborne states: ”Pascal was able to turn dry theological disputes into hard-hitting, entertaining satire.” For all his mystery, we can glean from this alone that for all his seriousness and erudition; Pascal also had a wicked sense of humor.

If there was ever a defense of how doing very little could make us hugely productive, who better to cite than Blaise Pascal. “All of humanity’s problems stem from man’s inability to sit quietly in a room alone,” he wrote impishly in the 1660s and with good reason. Not only did Pascal’s minimal, housebound experiments see him found probability theory before turning twenty, the Frenchman is the hand behind a significant number of inventions essential to our everyday lives.

Before you wave him aside as just another of history’s overachievers, remember Pascal when you next ride the bus, do a calculation on your smartphone, get a vaccine or wager a bet. Simple enough actions sure, but as Pascal himself said, “ordinary minds think about extraordinary things, but great minds think about ordinary things,” making him without any doubt the godfather of ordinary miracles.