Rotten Teeth, village football, and no baths: The Hard to Believe Realities of Life in Tudor England

The Tudor period started in 1485 and ended in 1603. Many people idealize Tudor England, but life in those Medieval times was rough — and oftentimes brutal. In fact, in some regards, it seems almost impossible to believe how people lived at the time. Here are just some of these strange facets of the medieval time.

Contrary to popular belief and despite virtually non-existent tooth hygiene, most people had fairly good teeth in early medieval times. Early Tudor Britain had not yet encountered sugar and white teeth were considered a sign of beauty. But that changed significantly when sugar was introduced. Tooth quality would never be the same again.

Initially though, only the elite could afford sugar, and this had a very taxing effect on their dental hygiene. It is said that Elizabeth I had a soft tooth, and her passion for sweets caused her teeth to go black and fall. In a short time, most of the British elite had black, rotten teeth. As a result, bad teeth became associated with nobility and ended up being quite fashionable.

In what seemed like a short-lived trend among the ladies, they would blacken their teeth to demonstrate that they, too, can afford vast quantities of sugar. Yep, black teeth were a sign of high class once.

Baths were thought to give you the plague

People avoided taking baths as much as possible. The general belief seemed to be that bathing “opened the pores” which could let the plague in. Hygiene during the time is still a matter of heated debate; people likely weren’t as dirty as they’re often depicted, but municipalities were overcrowded and unhygienic.

There were no sewers or drains, and garbage was simply abandoned in the street. Animals such as rats thrived in these conditions. In larger cities (especially London), diseases caused by the lack of sanitation were quite common.

After giving birth, a woman had to be “cleansed” 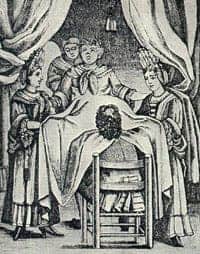 Childbirth was very dangerous at the time as complications were quite common. Even if a delivery was successful, the woman was prone to illness due to lack of hygiene. When it was time for them to deliver, high-class Tudor women would retreat to their “confinement” quarters – with no men being allowed to enter (generally).

Furthermore, after giving birth, women could not lay with their husbands until they were “cleansed” by the church. Women had to be “cleansed” even if they miscarried or gave birth to a stillborn.

Being an axe-man was not an easy job. Not only were they usually killing people, but the pay was really bad. Often, they were only given the clothes of the condemned. They formally asked the condemned to forgive them, and were often given a coin in the hope that they would “strike true”.

Most criminal punishments were extremely cruel. People were whipped (flogged) or hanged for petty thefts or small crimes. You could be hanged for stealing a loaf of bread. When Queen Elizabeth took the throne, torture became even more common. Women were burned alive for treason or witchcraft, though some took pity on them and strangled them first to spare them the ordeal.

Crosses were placed at crossroads to prevent people from urinating

Even today, England has a problem with public urination. Back then, however, the problem was way worse.

Crosses were placed at specific crossroads or in specific places or near the corners of palaces to dissuade men from “relieving themselves.” It’s unclear just how effective this method was. 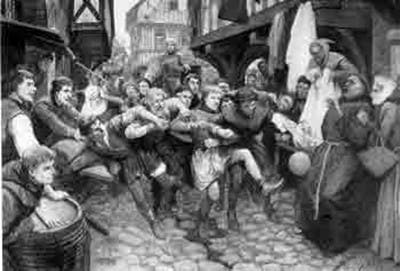 To say that football has changed a lot is an understatement. In the Tudor times, the two goalposts were set about a mile apart and everybody was welcome to play – the only rule was to get the ball through one of the nets. You could throw it or kick it.

These “games” were invariably very violent, and many were injured in the aftermath. Ultimately, the game was banned because it was observed that the ones that got hurt more often were young men who could have otherwise served in the military. As a matter of fact, almost all games were banned at one point because it was considered that they were not proper behavior.

Bear-baiting was popular in England until the 19th century. King Henry VIII and Queen Elizabeth I are both known to have attended bear-baiting events. A “bear garden” would be built, with places for the nobles and royalty to watch from a safe place. The bear was chained to a post in the middle and dogs would then be set on it. The dogs were replaced as they got tired or were killed by the bear.

In some cases the bear was let loose, allowing it to chase after animals or people. For a long time, the main bear-garden in London was the Paris Garden. Elizabeth often featured bear-baiting events in her tours, and Henry VIII was also a fan. When an attempt was made to ban bear-baiting on Sundays, Elizabeth overruled Parliament.

Generally, the Tudor Period was one of great progress. More children started to attend education, population increased after the plague and the agricultural crisis. However, today, we’d find it hard to imagine what happened during those days.