The Heaviest Living Organism in the World

What is the heaviest living creature in the world? It’s not an elephant or a blue whale, the heaviest organism is actually an Aspen. Pando, as it is called, is a clonal colony of a single male quaking aspen; basically, it looks like more trees, but it’s actually just one living creature with one massive underground root system. The plant’s estimated weight is a whopping 6,000,000 kg (6,600 short tons)! With an estimated age of 80,000 years, Pando is also one of the oldest living creatures in the world.

A clonal organism (also called a genet) is a group of genetically identic individuals (usually plants, fungi or bacteria) that have grown in a given location; it’s basically just one individual, with more manifestations. In a way, all these trees are actually one tree. All the individuals originated vegetatively, not sexually. Vegetative reproduction is a form of asexual reproduction in plants, with new life emerging without the production of seeds or spores. The plant is basically cloning itself!

Above ground, these plants appear to be distinct individuals, but underground they remain interconnected and are all clones of the same plant. However, it can be quite tricky to tell if it is one individual or if there are in fact more of them. While there are several mechanisms for clonal organisms to thrive, in most woody trees, clonal colonies arise by wide-ranging roots that at intervals send up new shoots, termed suckers. 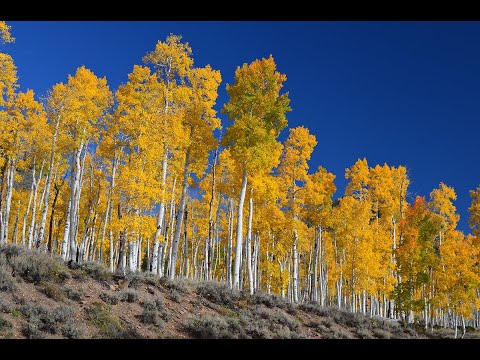 Such is the case with Pando. For the past 800 centuries, way before Homo sapiens started its written history and way before any civilization, the tree has perpetuated its genetic material.

Pando is located 1 mile southwest of Fish Lake on Utah’s Route 25. It is thought that for most of its life, The Trembling Giant, as it’s also called has grown undear ideal conditions for most of its life. Not only were the conditions ideal for it, but they basically destroyed its main competition: conifers. Forest fires are relatively frequent in the area, wiping out conifered; however, the aspen colony managed to survive due to its underground root system sending up new stems in the aftermath of each wildfire.

The climate has also varied during Pando’s life. According to modern measurements, a climate shift from wet and humid to semi-arid has obstructed seedling establishment and the accompanying rivalry from younger aspens.

Interestingly enough, clonal aspen groups are very common, but according to an Organization for Economic Co-operation and Development (OECD) report, they rarely grow over 0.1 hectares… while Pando covers over 40 hectares!

For most of its history, it went largely unnoticed. Any humans walking about it wouldn’t have seen anything different or remarkable, and for pretty much any viewer, it was just a forest like any other. It wasn’t until Burton V. Barnes of the University of Michigan came around in 1968 that it received any attention. Burton, an expert in aspen trees and colonies, managed to certify that Pando is one individual based on its morphological characteristics alone; he didn’t use any DNA or any molecular testings, because they weren’t developed at the time. Further analysis confirmed Burton’s findings, and Michael Grant of the University of Colorado at Boulder managed to confirm them in 1992; he also named the aspen colony Pando.

Measurements indicated that the Trembling Giant covers 43 hectares (106 acres), weighs nearly 5900 tonnes (13,000,000 pounds), and has over 40,000 stems (trunks). Individual trees might often come and go, but the colony survives and endures.

However, due to this reason, it’s very difficult to date the tree. Typical tree datings rely on cores to count the tree rings, but in this case, that’s not really relevant – because you would only find the age of an individual tree, not the age of the actual colony. This has prompted some researchers to think that Pando is much older than 80,000 years – with some even going as far back as 1 million years.

However, that’s pretty unlikely, although it’s possible that Pando is older than 80,000 years. This age estimate was based on a number of complex factors, including climatic and biological shifts. For example, 10,000 years ago was the last time when there were favorable conditions for flowering, and it’s believed that that’s the last time when Pando flowered. Michael Grant summed it like this:

“Despite enormous crops of viable seeds, successful seedling establishment appears to be a rare event in the semi-arid West, but the establishment of new trees from seeds appears to be common in the moist, humid forests of New England… aspen establishment from seeds probably has not occurred in the western United States since the last glaciation, some 10,000 years ago… Part of the rationale behind current age estimates for aspen clones is that sexual reproduction is effectively frustrated by the rarity of a favorable suite of conditions in semi-arid environments.”

Unfortunately, with all its rich history of surviving, Pando is threatened now. According to Paul Rogers, an ecologist at Utah State University in a October 2010 article, the Trembling Giant is in danger. Rogers reported a lack of young and juvenile stems to replace the older trunks, likely caused by overgrazing of deer and elk. Without new growth, to replace the old, the Trembling Giant is vulnerable to a catastrophic, sudden withering and shrinking. Rogers confessed, “It’s slipping away very quickly.”

Even with its regenerative abilities, Pando is also vulnerable to disease and insect infestation, but the main problem is the destruction of new stems and trees. For this purpose, there is a project to surround most of the colony with a fence, to prevent unwanted access in the area. This will help with the overgrazing, as well as with the cutting of the trees.

The quaking aspen takes its name from the sounds its leaves make – with only a gentle stroke of the wind, a fluttering sound multiplied countless times fills the air. This is just one individual… but it’s a trembling giant.