by Mihai Andrei
in Feature Post
Reading Time: 5 mins read
A A

One third of fracking chemicals are of unknown toxicity

Article
Featured Researcher: William Stringfellow
Affiliantion: Lawrence Berkeley National Laboratory
Research Interests: The major focus of his research is the study of environmental biokinetics (the study of movements of or within organisms).  In an open system, the state of the microbial community is determined by the physical and chemical conditions of the environment and is rarely, if ever, limited by availability of microorganisms. The microorganism will grow until the limiting condition is met, whether it is nutrient availability, energy supply, toxicity, or physical parameters such as available surface for attachment or washout conditions.

Scientific Paper
Article
Featured Researcher: Kenro Kusumi
Affiliation: Arizona State University
Research Interests: Kenro Kusumi studies development, regeneration, evolution and diseases of the spine. His research team explores what genes shape the vertebral column, how certain vertebrates such as lizards can regenerate their tails, how evolution has produced a diversity of spinal morphology, and how the inactivation of specific genes can lead to spinal diseases such as congenital scoliosis. They approach these questions by examining how genome information shapes development and adult function.

This bacterium shoots wires out of its body to power itself

Article
Featured Researcher: Mohamed El-Naggar
Affiliation: University of Southern California
Research Interests: Moh El-Naggar is a pioneer in studying energy conversion and charge transmission at the interface between living cells and synthetic surfaces. His work, which has important implications for cell physiology, may lead to the development of new hybrid materials and renewable energy technologies that combine the exquisite biochemical control of nature with the synthetic building blocks of nanotechnology.

How loud music damages your hearing

Hallucigenia revealed: the most surreal creature from the Cambrian

Scientific Paper
Article
Featured Researcher: Martin Smith
Affiliation: Cambridge University
Research Interests: “I am interested in the origin and establishment of the modern animal groups. My work includes the study of unusual organisms from Burgess Shale-type deposits and their microscopic counterparts, the Small Carbonaceous Fossils. I also have an interest in the phylogenetic techniques used to identify the affinity of these organisms, and in the preservation of these remarkable fossils.”

Scientific Paper
Article
Featured Researcher: Angela Belcher
Affiliation: Massachusetts Institute of Technology
Research Interests: “The focus of our research is understanding and using the process by which Nature makes materials in order to design new hybrid organic-inorganic materials. Our research is very interdisciplinary in nature and brings together the fields of inorganic chemistry, materials chemistry, biochemistry, molecular biology and electrical engineering.” 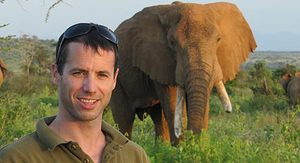 Article
Featured Researcher: George Wittemyer (donate to help fund his research here)
Affiliation: Colorado State University
Research Interests: George Wittemyer has dedicated his scientific career to research that is helping to combat poachers and conserve one of Earth’s most noble species – elephants. Wittemyer’s research is helping inform policymakers and potential ivory consumers around the world about the detrimental impacts of the illegal ivory trade on the elephant species, and he hopes the information from his findings will help stem ivory demand and prevent the continued decline of elephant populations.

All images taken from the researchers’ page.