As we were telling you a while back, the Western Black Rhino is officially extinct. Poaching, the loss of habitat, war… it was too much for the rhino to handle, and now, the species is extinct. But things don’t look especially better for other rhino species, and if something drastic doesn’t happen soon, we’ll soon be living in a world without black rhinos.

Appearance and lifestyle of the Black Rhino 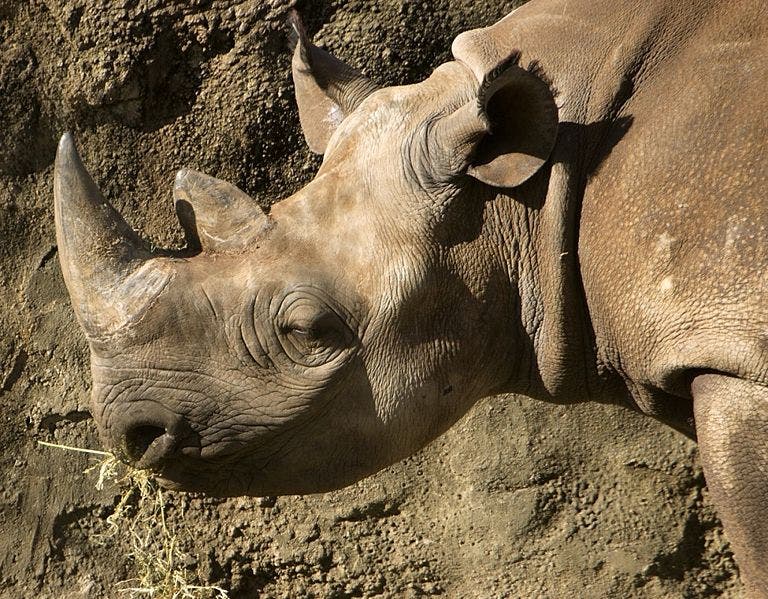 The black rhinoceros (scientific name Diceros bicornis) has two horns, and occasionally a third small posterior horn. The anterior horn is longer than the posterior, often measuring 0.5 meters. They weight around a ton (800-1400 kg), and despite the name, they’re not really black: they’re dark yellow, brown, or dark grey.

You’ve probably seen them on television or in books living in the grasslands of Africa, but rhinos can survive in a great variety of places, from deserts to montane forests. They are, however, restricted to stay close to water sources, and you’ll often find them in mud or water wallows, which they use to cool themselves.

They eat woody twigs and legumes, and a wide variety of plant species, but they really like acacias. They usually sleep during midday, when it’s very hot, and eat in the morning or in the evening. Reproduction is pretty delicate for them – the gestation period is 420-480 days and it takes a female 2-3 years before she can become pregnant again. Courtship behaviors before mating include snorting and sparring with the horns among males, but usually, mating rituals are not violent.

Conservation status of the Black Rhino 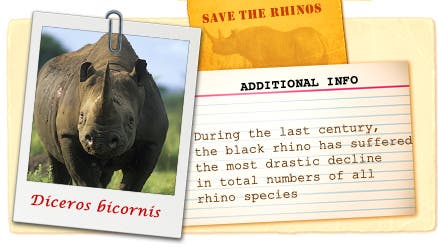 As I told you, a subspecies, the Western Black Rhino is already extinct. Theirs is a sad story: their numbers dwindled post World War I, but in the 1930, due to intense conservation effors, their numbers started rising again. However, by 1980 the population was in the hundreds. In 2004 there were only 10 known specimens, and in 2011, the IUCN declared the species extinct. It’s gone, and unless some extremely unlikely genetic breakthrough happens, the species will never come back again.

Where does that leave us with all Black Rhinos? An estimate 60.000 Western Black Rhinos existed in the 1960s, but 20 years later, their numbers went down to 10.000. In 1993, only 2,475 black rhinos were recorded. However, there’s some good news. Despite all the poaching, despite all the habitat loss and despite the recent threat in the form of invasive plants, their numbers have began to rise slowly. It’s estimated that today, their numbers are just a little over 4.000.

Distribution and subspecies of the Black Rhino 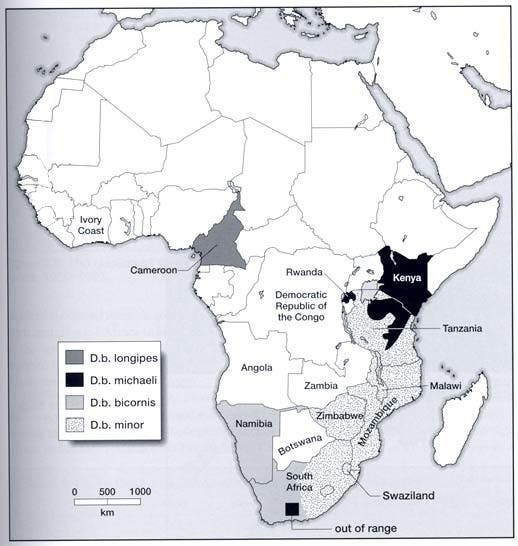 Their patchy distribution is part of what makes them vulnerable: 98% of the total population is found in just 4 countries: South Africa, Namibia, Zimbabwe and Kenya. Almost 40% of all numbers exist in South Africa.

What you can do to help

Of course, for most of you, Africa is a distant place, one which you don’t really think you can impact – but you’re wrong. No matter where you are, you can do a difference. Here are just some of the things you can do:

Donate! Sadly, most conservation efforts come from the outside, as many African countries either don’t want to, or don’t have the financial possibilities to support them. However, when donating to rhinos, you can see exactly what your money goes into, which is usually equipment such as binoculars, radios, camping equipment, training, and even bullet proof vests, because poachers sometimes try to shoot conservationists. Without a doubt, one of the most active organizations in the field is WWF, though you can find other ones as well.

Spread the word! Even if you don’t see any rhino horn products and you can’t (or don’t want to) donate, that’s cool! Odds are, you know something who does, so spread the word! Facebook, Twitter, email you’d be surprised to find out just how much you can help just by spreading the word.