In 1950, a researcher discovered the “pleasure center” of the brain, giving a woman a 30 minute orgasm

It’s the early 1950s, and some strange experiments are going on at Tulane University in Louisiana. Well, maybe not weird, but definitely pushing the limits of neurophysiological knowledge one step further. Dr. Robert G. Heath is at the forefront of these experiments, and he found that he can manipulate both the pleasure and pain centers of the brain, just by surgically placing electrodes on the subjects. 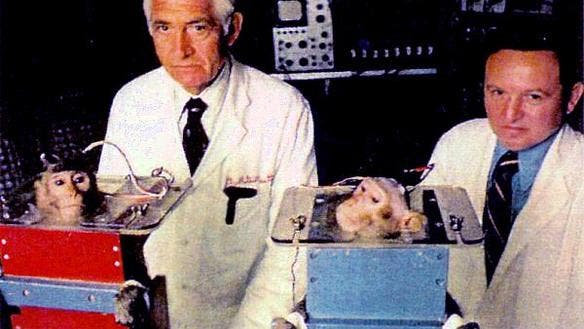 “By implanting electrodes and taking recordings from these deep-lying areas,” he explains, “we were able to localize the brain’s pleasure and pain systems. We’d interview a patient about pleasant subjects and see the pleasure system firing. If we had a patient who flew into a rage attack, as many psychotics did, we’d find the ‘punishment’ system firing.

Basically, he was toying with the idea that you can immediately calm violent psychotic episodes, as well as a myriad of other problems just by sending current into their brain’s pleasure centers. This method was only a temporary fix, so Heath came up with a more permanent solution.

Heath had to devise safer electrodes that could be left in the brain for years so that a patient could be restimulated at intervals. Then, in 1976, the “most violent patient in the state” — a mildly retarded young man who had to be tied to his bed because of his savage outbursts — received Dr. Heath’s first brain pacemaker.

Most of the experiments were very successful. The mildly retarded man was cured of his violent outbursts, a young librarian was also cured of seizures, and a former physicist no longer heard voices in his head that told him to strangle his wife. Patients would sometime relapse, but it was shown that they only relapsed when the pacemaker was broken – each and every time the pacemaker was fixed, the problems went away.

But some more weirder experiments were undertaken as well. Heath stimulated a woman’s pleasure, giving her a 30 minute orgasm. He also tried to “cure” a man of homosexuality: he provided him with a prostitute, and upon the refusal, he experimented with his pain centers. There was a particularly striking description of the man’s reaction to the excruciating pain:

His face twists suddenly into a terrible grimace. One eye turns out and his features contort as though in the spasm of a horrible science-fiction metamorphosis. “It’s knocking me out … I just want to claw…, ” he says, gasping like a tortured beast. “I’ll kill you…I’ll kill you, Dr. Lawrence.”

Today, this treatment is relatively common for a number of conditions, including Parkinson’s disease, dystonia, and essential tremor. The treatment includes installing a brain pacemaker that is much smaller and more sophisticated than the 1950 version – but the basic principle is the same. Still, complications can occur – hallucinations, cognitive dysfunction, compulsive gambling, and hypersexuality are the most reported ones. Another advantage however, is that unlike drugs, you can’t develop tolerance to this kind of treatment.