by Tibi Puiu
in Did you know?, Technology
Reading Time: 3 mins read
A A
Share on FacebookShare on TwitterSubmit to Reddit

In the wake of 9/11, airports all over the world ramped security heavily to counter the risk of a terrorist threat. Around this time, spirits were high so quite a few bold ideas were thrown on the table, some more outlandish than others. Take this 2002 patent by Airbus which involves fitting a freaking trap door in front of the cockpit’s entrance. Once in position, a demanding but unsuspecting terrorist would find the floor underneath him collapse at the whim of the pilot who only needs to press a red button.

“In an aircraft cabin floor adjacent to the cockpit, a trap door opens downwardly into a security cell, to trap a terrorist trying to enter the cockpit. Two walls with lockable airtight doors bound a safety buffer cabin between the cockpit and the passenger cabin,” the authors of the patent wrote. 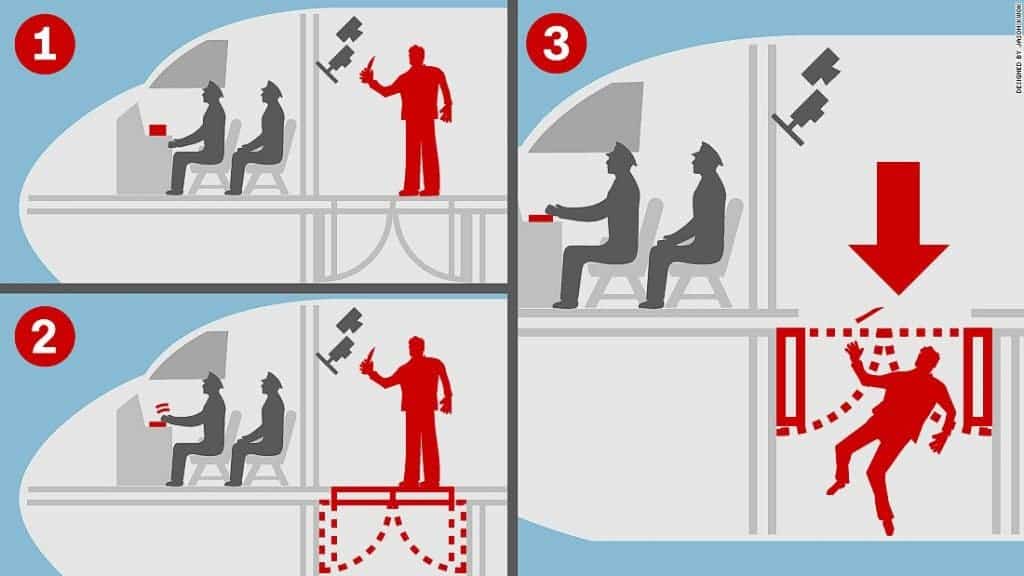 The trap door is one aspect of a far broader anti-terrorist security system Airbus had in mind. In the same patent, engineers thought about placing all sorts of sensors virtually on every seat in the cabin. These sensors can monitor passenger traffic inside the cabin, for instance, and signal an alarm to both the cockpit and ground control that suspicious activity that doesn’t fall in a predefined pattern is happening. The pilots inside the cockpit can then activate countermeasures like turning off the lights in the cabin, using an extremely intense and annoying pneumatic horn, injecting sleeping gas, and much more.

“Sensors like seat occupancy sensors, motion detectors, video cameras and microphones provide data regarding the location, movement and activities of passengers to a system that evaluates the data to recognize unusual data situations indicating one or more escalation levels of suspicious or aggressive actions by passengers. Alarm signals and terrorist countermeasure devices such as fogging or tranquilizer gas generators, noise generators, high intensity blinding/glaring lights, a cabin lighting master shut-off, window darkening devices, and tranquilizer dart guns are actuated automatically by the evaluation system, or manually by a cockpit input device or a portable signaling device carried by a flight attendant.”

This patent never made it past the drawing board, though. Most likely, Airbus thought fitting a tranquilizer dart gun that can be fired remotely from the cockpit by a man wearing night vision goggles (seriously) is a bit too much. I think so too, but still way more moderate than another crazy patent ZME Science featured: a detachable passenger and cargo cabin that springs away from the aircraft in case of emergency, then safely lands via parachute. Oh, gosh…

What do you think? Is this what safe flying is all about? Would you fly in one of these?