Theremin: the electronic instrument you play without touching anything

The theremin is a unique musical instrument which involves two antennas and which you can play with your bare hands, without touching anything. We'll talk about its history, the working principle and how you can play/build your own.

The theremin is a unique musical instrument which involves two antennas and which you can play with your bare hands, without touching anything. We’ll talk about its history, the working principle and how you can play/build your own, but first, this is what a theremin sounds like:

The instrument was developed by a Russian inventor, Léon Theremin, and patented in 1928. Theremin was a talented inventor, creating several devices used in spying. Most notably listening device, “The Thing”, hung for seven years in plain view in the United States Ambassador’s Moscow office and enabled Soviet agents to eavesdrop on secret conversations.

Ironically, the invention of the theremin came as a result of Soviet investment in the research of proximity sensors. During the Russian civil war, Theremin moved to the United States, where he could patent his work and start selling it.

“Make music with the wave of a hand! Sound like an opera star! So easy, anyone can do it!” – these were the early selling points of the theremin, but sales never really took off, at least not at first. Early theremins looked more like a writing desk than a musical instrument, and despite its claimed ease of play, it was regarded as a difficult instrument. Still, it was popular in some niche circles and was the earliest electronic instrument to be mass produced.

It had a brief surge of popularity after WWII, but quickly dropped as other electronic instruments gained traction. It witnessed a resurgence in the 1990s, but never really became a musical staple. To this day, it is known and used only by a few musicians, being more popular with engineers than artists.

How a theremin works 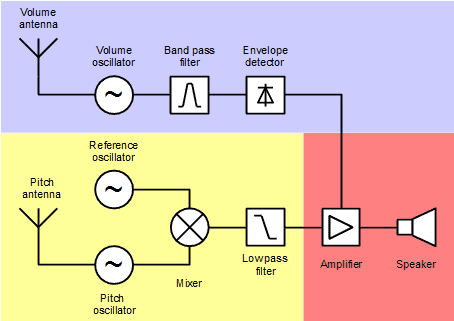 The main thing which distinguishes the theremin from all other instruments is that you play it without any physical contact. The player (thereminist) sits or stands in front of the instrument and moves his or her hands in the proximity of two antennas, with one antenna determining the frequency of the sound (the pitch) and the other determining the volume. The antennas aren’t used to broadcast or receive radio or other similar signals, but rather act as capacitor plates.

What happens is, if you mix the signal of two Radio Frequency oscillators (RF oscillators), you’ll get many different outputs, but the most important ones will be the sum of the difference of the frequencies. Let’s say you use a 500 kHz (500,000 Hertz) and a 501 kHz oscillator; the sum will be 1001, and the difference will be 1 kHz, which is audible.

Now, you might be wondering why you’d use two oscillators to create one sound. Well, this is the magic of the theremin. If you move your hands close to the antenna, you chance its capacitance, and therefore change the frequency. This firstly allows you to play the instrument by changing its pitch. Secondly, these changes are quite small (generally around 1% of the frequency value). So if you’re using a 501 and a 500 kHz oscillator, you get between 0-1 kHz, which is a broader range than if you’d just use one. Now, all this is just for one antenna, the one responsible for the pitch. As mentioned above, there is another antenna, one that’s responsible for the volume.

Again, for the volume antenna there’s an oscillator which changes frequency when you move your hand close to it. The signal also gets weaker or stronger depending on how you move your hand towards it, and the strength of this signal can then be transposed into volume in several ways.

The sound of the theremin

In theory, the theremin produces a pure sine wave, which translates into a crisp and clean sound. However, in practice that isn’t really the case, as most thereminists purposefully choose a more complex, “fuller” sound.

Another interesting peculiarity of the instrument is that the player must “play the stops”, as well as the actual music. With other instruments, when you’re not doing anything the instrument is simply quiet but that’s not really the case with the theremin. If the pitch hand is moved between notes, you have to move the other hand to cut the volume, as otherwise you’d create a sweeping type of sound, akin to a swanee whistle or a glissando. This makes it quite difficult to control, but also gives you more freedom to experiment with sound transitions. This is a part of why the theremin is so appreciated with many experimental musicians. The critic Harold C. Schonberg described the sound of the theremin as “(a) cello lost in a dense fog, crying because it does not know how to get home.”

Several notable musicians and musical groups have incorporated the instrument into their music. Jimmy Page of Led Zeppelin used a variation of the theremin during performances of “Whole Lotta Love” and “No Quarter” throughout the performance history of the band. Brian Jones of The Rolling Stones also used the instrument. Contrary to popular belief, the Beach Boys’ “Good Vibrations” is played with a different insturment, called an electro-theremin in honor of the original theremin.

How to build your own theremin

Building a theremin is not for the faint of heart, and it’s not a project for the novice engineer. The easiest project I could find is one involving a Raspberry Pi (a microcomputer), some speakers and an ultrasonic distance detector (it doesn’t operate on the exact same principle as the original theremin, but you bypass some of the technical difficulties). The full link to the project instructions can be found here.

Another, more complex project can be found here. It’s quite a hefty shopping list, but the article comes with detailed instructions. This PopSci article for a pocket theremin is also worthwhile if you want to develop a smaller instrument.

There are quite a few notable theremin performances, even though the instrument is quite difficult to play. Here I’ve selected only a few, though I’m sure there are many others, just as good. Feel free to share them in the comment box.

You can also see Jimmy Page playing it live here.