Stinky Frogs to Give Their Human Predators Clues to Survive Diseases

Hyderabad, Dec 10, 2011: Believe it or not. Foul smelling frogs not only offer clues to prepare a new range of antibiotics but boost human immune system against bacterial attacks. 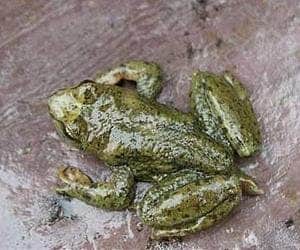 This is despite the fact that human beings continue to haunt the frogs and butcher them for a variety of cuisine like ‘jumping legs’ in restaurants world over though the amphibians protect our environment.

Scientists are now working on clues to developing a new generation of antibiotics from the skin of the stinking frog species, according to the American Chemical Society’s latest Journal of Proteome Research.

The simple fact is that the rotten fish smelling frogs, could survive the worst bacterial attacks in their life span as their skin emits some chemical substances that have the anti-bacterial properties.

Scientists from China, which is one of the countries where frog delicacies are sold in the open, had identified more than 700 of the chemical substances from nine species of odorous frogs.

“We are trying to identify the specific Anti-Microbial Peptides (AMPs)  that account for almost one-third of all peptides found in the world, the greatest known diversity of these germ-killing chemicals,” the scientists said.

It might be recalled that a polychrest drug from the poison of  “Bufo Rana” was prepared in Homoeopathy to treat various disorders including nervous troubles, paralysis, rheumatism and impotence.

Homoeopathic Bufo is made from the poison of the toad. The toad releases poison when it is teased or irritated. It can paralyze a dog. The Chinese were the first to apply dried toad poison for a variety of complaints. //EOM//