Last Friday, sixteen students from the University of Florida entered in an unusual competition: a race between drones controlled solely by the participants' thoughts.

by Tibi Puiu
in Mind & Brain, News, Tech
A A

Last Friday, sixteen students from the University of Florida entered in an unusual competition: a race between drones controlled solely by the participants’ thoughts.

Drone races have become quite popular in the last few years. The first US national drone racing championship took place last summer in California, garnering a sizable audience eager to watch how drones dodge and crash at more than 70 mph. There’s even a Drone Racing League (DRL) which in time hopes to rival the success of NASCAR or Formula 1.

The brain-controlled drone race at the University of Florida was far less spectacular in drone maneuvers. The flying copters moved arduously slow and somewhat uncoordinated, but that still sounds fantastic when you consider these were controlled by the minds of the students’ only. No joysticks or virtual reality involved.

Participants wore electroencephalogram (EEG) headbands which relay brain signals akin to “move foot forward” or “turn right” to a brain-computer-interface (BCI) system. This sort of tech has been previously used by paralyzed patients to move robotic arms and legs like they would their own limbs.

“We have a computer program that you look at, and we tell you: ‘Think forward, like think about pushing a chair forward,’” said Juan Gilbert, chairman of the Department of Computer Science and Engineering at the University of Florida. 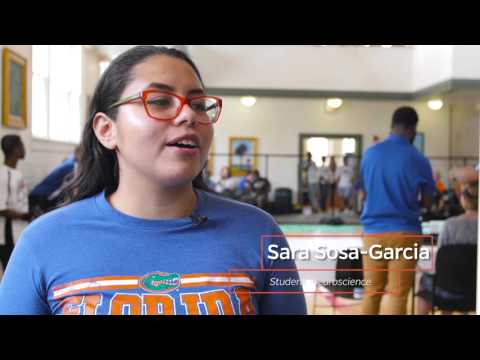 “So we learn to navigate the drone based on your brain patterns for specific things you’re thinking about. We’re starting a new trend in society. There will be future brain-drone competitions. We’re starting out with a simple little race right now—who knows where this will go? It’s exciting.”

Although BCI was initially developed for medical purposes, we no see it transferred for general purposes like entertainment and enhancement. Theoretically, it’s possible to control 2 pairs of arms or more using a BCI. You can also control avatar robots with a BCI, something that DARPA and the military are watching closely. There’s even a brain-gene-interface which allows a genetic switch to be operated by brain activity while the brain-to-brain interface allows telepathic-like exchange of information.