If you're having trouble sleeping at night, read on.

The fifth variable that I will be manipulating across a two week period to examine its impact on sleep is the importance of giving ourselves time to relax and wind down before sleep.

I will discuss what my data shows, how easy or difficult I found this strategy to implement, and what previous research says. These three factors will be combined for an overall score and grade on how effective winding down and relaxing before bedtime is at helping people to improve their sleep.

For me, the answer is a lot more than it used to be. I remember back when I was completing my Doctorate in Clinical Psychology, I would finish up my day of placement at Peter MacCallum Cancer Centre and walk through the Fitzroy Gardens on the way to Jolimont train station. It was a nice way to end my work day with a brisk walk and lovely scenery, but the thing that always amazed me was the number of people who were laying around, reading a book or chatting with friends. “Where do they find the time?” I would ask myself in amazement, as I checked my phone to make sure that I wouldn’t be late for the next train.

A Doctorate is a great way to become more self-disciplined and efficient, as it involves trying to juggle coursework with research, writing a thesis and clinical placement. It isn’t great for a work/life balance, however, as even after a full day of work and study it always felt like there was a copious amount of work that still needed to be done.

Once my thesis was finally accepted in 2014, I remember walking through those same gardens after a day of work at the Melbourne Sleep Disorders Centre and noticed that there were still people out and about, exploring the garden paths with their kids or having a picnic under a tree. “Where do they find the time?” I asked myself again.

I was now working full-time in private practice as a Clinical Psychologist, and in general, I was feeling more relaxed and less rushed, but always felt like there were more things that needed to be done that were more important than lying around in the park on a weekday afternoon.

Now I’m only working four days a week and I finally get it. It’s a trap to keep waiting until we find the time to do something. We have to make the time to do it. Just ask time management expert Laura Vanderkam:

So last Monday, on my usual day off, I decided to go back to Fitzroy Gardens again. Instead of walking briskly like I used to do I now strolled, found a nice spot, and laid back on the grass, staring up at the sky. Thoughts of lying back on my trampoline when I was younger and trying to make out shapes in the clouds came rushing back to me, and I began to just take in my surroundings and relax even though I was only five minutes away from all the hustle and bustle of the city.

After 30 minutes of relaxing, I carried on with my day, much less frantic and hurried than I used to be only a few years before.

There are three main things that I look at during an assessment of a client with sleeping difficulties. Firstly, their sleep pressure and if this is high enough each night when they are going to bed. Secondly, their circadian rhythms and if they are in bed at the right times based on their internal body clock. The last factor is hyper-arousal, or how active their brains are during the day and at night.

Hyper-arousal tends to be the main problem for the majority of individuals that I see with chronic insomnia. By the time they come to see me they have generally tried as many of the sleep hygiene instructions that they can and are getting more and more frustrated and worried that their sleep isn’t improving. What they often don’t realise is that this frustration and worry is only further elevating their nocturnal hyper-arousal, and it is preventing them from getting the very thing that they desire – a nice, deep, restful and restorative sleep.

Cognitive arousal, or a busy mind, is ten times more likely to be rated as the reason for sleep difficulties by patients with insomnia than physical arousal, or a tense and restless body. Given how much information people are exposed to these days, and how little they tend to move, this doesn’t surprise me at all. Just think about how many people you see on their phones wherever you go. I even saw someone checking their phone whilst skateboarding the other day.

What would happen if we all decided to do less? If we took some time out during the day to power down, do nothing and just be? If we all stopped trying to work and achieve for at least the last hour before bed each night and focused instead on winding down, relaxing and preparing our mind and body for sleep?

For the first week, I stopped doing any form of “work” at least two hours before bed. This meant four nights of watching Netflix on TV (with blue-light blocking glasses on), one night of reading, and two nights of guided meditation using the phone app calm.

For the second week, I made sure that I didn’t do anything specific to wind down, and did work on the computer (with f.lux on) on the five weeknights (Sun-Thur). On the weekend I didn’t have the chance to do work as I was away at a Bachelor or Buck’s Party, but did socialise right up to bedtime without actively trying to do anything to wind down. 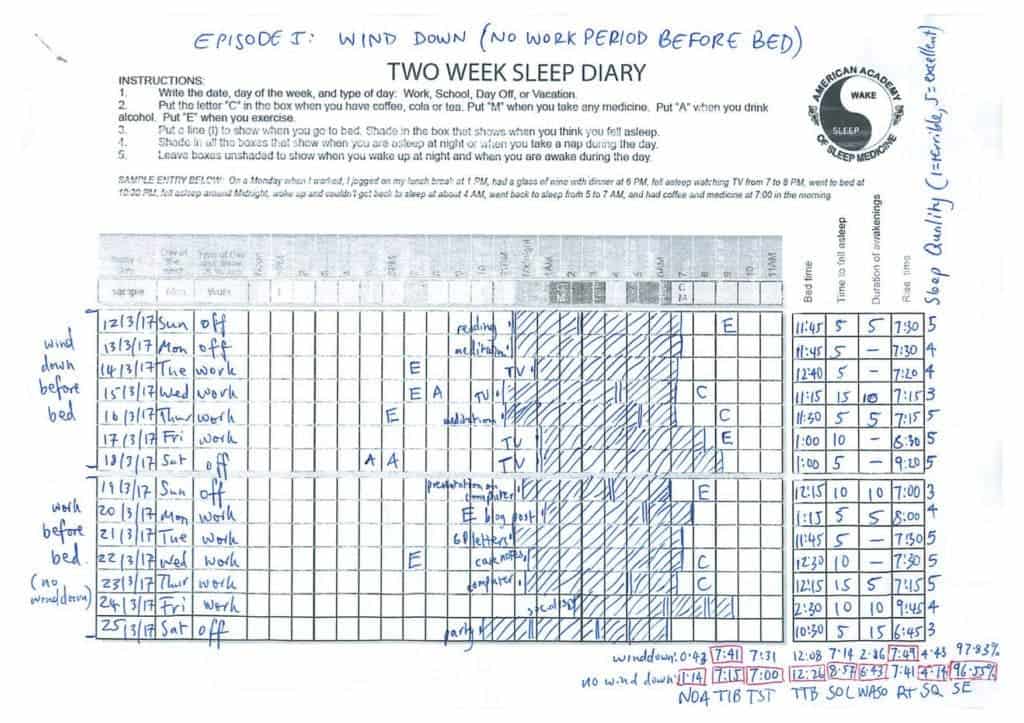 Comparison: Working right up until bedtime vs winding down and relaxing before bed

Subjectively, I woke up nearly three times as much by working right up until bedtime. I still managed to get 7 hours of sleep per night and fell asleep in under 10 minutes once in bed. I also had a sleep efficiency of 96.55%, which is excellent, but I went to bed 18 minutes later, took longer to fall asleep, and spent more time awake during the night. The only thing that was better on the week where I worked right up to bedtime was my rising time in the morning, as I got out of bed 8 minutes earlier each day.

By taking the time to wind down and relax before sleep my sleep quality was the second best it has been all year (no alcohol was better) and I slept 31 minutes more per night. The 7 hours and 31 minutes of sleep that I obtained on average in the week that I stopped working and relaxed before sleep was 15 minutes more than I had obtained in any other week this year! 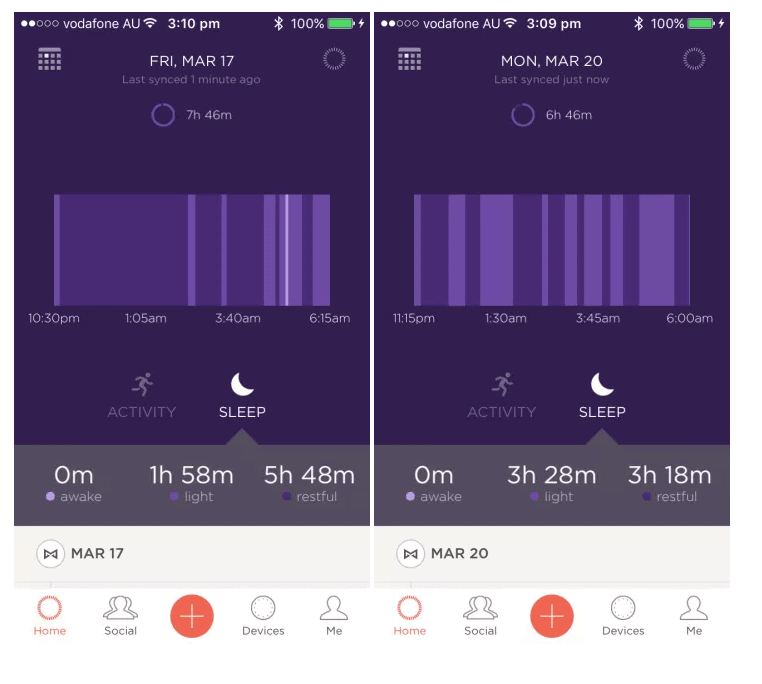 Objectively, the depth of my sleep was much better during the first week when I was winding down than when I was working right up until bedtime.

Let’s compare Mar 17 (16/3/17 on the sleep diary) to March 20 (19/3/17 on the sleep diary data). Granted, I did have to run an all-day workshop on sleep on the Monday, which I was a bit nervous about. This did seem to make my sleep more restless, and I slept an hour less than the Thursday before when I had meditated before bed.

Even though I was only in bed for an extra hour after meditating, I obtained 2.5 hours more restful sleep, as you can see for yourself on the Misfit Ray data above. The objective difference in sleep quality is important for daytime functioning, mood and energy levels, and it suggests that mindfulness meditation is worth exploring further.

Yes. Notice how with this technique I mixed up how I wound down and also mixed up the work that I did, but in general taking some time out before sleep to relax was very effective in improving my sleep, especially my sleep quality and total sleep time. I therefore give the effectiveness of this strategy a 22/25.

For me, the flexibility of this strategy is great, as I don’t have to do exactly the same thing every night and can fit in with others too (as long as I find it relaxing). I therefore give the applicability of this strategy a 23/25. All you have to do is stop trying to be productive right up to bed time, and actually give your mind a chance to wind down in the last hour before bed.

In Perlis and colleagues’ (1997) neurocognitive model of insomnia, they say that hyper-arousal interferes with both sleep initiation and sleep maintenance. They also say that people with insomnia develop conditioned cortical (mental) arousal from the association of sleep-related stimuli and sleep difficulties (Perlis et al., 1997).

In Espie’s (2002) psychobiological model of insomnia, he says that normal sleep processes are disrupted, resulting in difficulties disengaging from active wake processes. This leads to higher cortical arousal and lack of inhibition of arousal (Espie, 2002).

Kleiner and Pavalko (2010) have found that individuals who work over 41 hours a week report worse mental and physical health. Other studies have found a link between longer working hours and stress, poor sleep, depression, anxiety, increased alcohol use, coronary heart disease and potentially even cancer (Heikkila et al., 2016).

By reducing the working hours of medical interns, Lockley and colleagues (2004) found that weekly sleep times increased by 5.8 hours and the rate of attentional failures during night shifts was more than halved.

I therefore give the science of this strategy a 40/50.

Hyper-arousal, especially an active mind, is the #1 reason that individuals with insomnia cannot sleep.

It doesn’t matter how this arousal level is lowered, or how you choose to wind down and relax, but preferably you don’t want it to disrupt your circadian rhythms, so minimising bright screen use in the last two hours before bed is advisable.

Apart from that, experiment a bit. Socialising with others is okay, as is reading, listening to music, doing some light stretching, engaging in a relaxing hobby, having a hot bath (30-60 minutes before bedtime) or meditating. Find what works for you, and then try to develop a bit of a wind-down routine each night to see if this helps your sleep.

It is also important to make sure that you are not working too much (if this is possible). Anything more than 9 hours per day or 48 hours per week is likely to lead to poorer self-care and poorer health, and it is also likely to reduce your productivity whilst working. Sweden has dropped down to 6-hour work days, and in time we’ll hopefully see the health benefits that this brings.

Lastly, try not to focus too much on sleep, or worry about the negative impacts of not sleeping. The more attention that we have on it, the greater effort that we put into it and the greater intent that we have towards getting to sleep, the less likely it is to come. Sleep is an involuntary process, which means that there will never be a strategy that offers a 100% guarantee that you will sleep well tonight. It’s much better to focus on relaxing and lowering our arousal before bed, waiting until we feel sleepy before going to bed, and then allowing sleep to come.

This is an article by Dr Damon Ashworth, a Clinical Psychologist who specialises in treating sleep disorders. He works as a Clinical Psychologist in private practice at the Melbourne Sleep Disorders Centre and with Victorian Counselling & Psychological Services. Follow his blog for the next episode on food and sleep, an investigation which will see if the type of food and the timing of eating can impact our sleep quality.