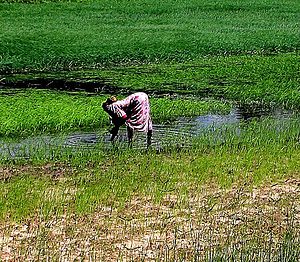 Beware of snails before you swim in shallow waters of tropical countries such as India. You can avoid parasitic worm infections caused by the snails, according to a new study. The risk is more in flood hit areas, such as Andhra Pradesh which requires a ground survey to prevent infections which could be detected through urine or stool test.

The scientists caution people in Africa, Asia and South America where access to clean water and good sanitation facilities are scarce.

“Snails that live in tropical freshwater in these locations are intermediaries between disease-causing parasitic worms and humans”, scientists claim.

The result is schistosomiasis, the second most socio-economically devastating disease after malaria. As of 2009, 74 developing nations had identified significant rates of schistosomiasis in human populations. There has been much debate about how best to prevent the disease, says Charles King, a physician and researcher at Case Western Reserve University in Cleveland, Ohio.

“Beyond that,” he asks, “how long should treatment last once someone has schistosomiasis?”

“Current guidelines focus on suppressing the disease’s effects by limiting the infection during childhood,” says King. “But that may not be enough to cure it or to prevent re-infection, leaving children still at risk for stunted growth and anemia,” he adds.

King and colleagues recently published results of a study of long-term treatment of schistosomiasis in the journal PLOS Neglected Tropical Diseases. The team’s work is funded by the National Science Foundation (NSF)-National Institutes of Health (NIH) Evolution and Ecology of Infectious Diseases (EEID) program. At NSF, the EEID program is supported by the Directorate for Biological Sciences and Directorate for Geosciences. At NIH, it’s supported through the Fogarty International Center.

Schistosomiasis is usually treated with a single dose of the oral drug praziquantel.

World Health Organization (WHO) guidelines set forth in 2006 recommend that when a village reports that more than 50 percent of its children have parasite eggs in their urine or stool– a clear sign of schistosomiasis– everyone in the village should receive treatment. When 10 to 50 percent of children are affected, say the guidelines, only school-age children should be treated–every two years. With less than 10 percent, mass treatment is not suggested.

But because of the long-term health effects of schistosomiasis, says King, “we now think it’s better to provide regular yearly treatment.”

He and scientists Xiaoxia Wang, David Gurarie and Peter Mungai of Case Western Reserve University; Eric Muchiri of the Ministry of Public Health and Sanitation in Nairobi, Kenya; and Uriel Kitron of Emory University in Atlanta, Georgia, used data collected in 10 villages in southeastern Kenya to run advanced models of village-level schistosomiasis transmission.

They scored the number of years each of the 10 villages would be projected to remain below a 10 percent infection level during a simulated 10-to-20-year treatment program. All strategies that included an initial four annual treatments reduced community prevalence of the disease to less than 10 percent. Programs with gaps in treatment, however, didn’t reach this objective in half the villages.

At typical levels of treatment, the researchers found, current WHO recommendations could not achieve full suppression of schistosomiasis.

“With more aggressive annual intervention that lasts at least four years,” says King, “some communities might be able to continue without further treatment for 8 to 10 years.

“But in higher-risk villages, repeated annual treatment may be necessary for an indefinite period–until the eco-social factors that foster the disease [such as poor wastewater treatment] are removed.” 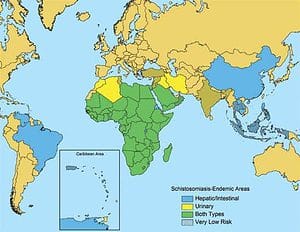 In high-risk places, ongoing surveillance for the disease and annual drug treatment, the scientists say, need to become the mainstays of control. In short, these villages require what they call “re-worming after de-worming.”

But what happens if townspeople move to a more arid location, one with less freshwater and fewer snails? In drier landscapes, schistosomiasis is a rare event that happens only during floods. Response to treatment therefore may be much better. Unless or until another flood occurs. Although drier locales carry less risk for the disease, they’re by no means free and clear. Even in arid locations, people need to get treated more than once to get rid of the parasites.

“This research demonstrates the value of understanding where disease-causing organisms are in the environment,” says Sam Scheiner, NSF program officer for EEID.

“Such knowledge can reduce human diseases much more effectively and at a lower cost than simply focusing on treatment.”

The best goal, says King, is complete eradication of schistosomiasis.

To achieve that, scientists need to determine what makes a “wormy village,” how often therapy is needed to prevent disease in such locations–and what can be done to change the environment such that a high-risk village becomes a low-risk one.