by Tibi Puiu
in Discoveries, Diseases, Health & Medicine
A A

Remarkably, researchers University of California, Berkeley  have discovered that a chemical called AAQ can temporarily restore the vision in blind mice. The find might help people suffering from inherited genetic blindness or age-related macular degeneration, and bring back light into their world.

The process isn’t quite as easy as applying eye drops, but it’s a whole lot less intrusive than surgery, bio-chips or optogenics, which make the patient susceptible to side effects or various other complications. Here’s how it works.

Both retinitis pigmentosa, a genetic disease that is the most common inherited form of blindness, and age-related macular degeneration, the most common cause of acquired blindness in the developed world, the eye’s photoreceptors become dysfunctional because the light sensitive cells in the retina — the rods and cones — die.

The AAQ (acrylamide-azobenzene-quaternary ammonium) chemical works its magic by making other cells in the eye, like the retinal ganglion cells (RGCs), which are inherently blind, act as photoreceptors, turning them light sensitive. When switched on by light, AAQ alters the flow of potassium ions through the channels and activates RGCs much the way rods and cones are activated by light.

In the paper, published in the journal Neuron, the scientists write that AAQ basically acts as  a “photoswitch” that binds to protein ion channels on the surface of retinal cells.

To test the chemical out, the researchers applied it on the retina of  blind mice, which had genetic mutations that made their rods and cones die, as well as inactivated other photopigments in the eye. When the AAQ was injected into their eyes, in very small amounts, the team of scientists lead by Richard Kramer, UC Berkeley professor of molecular and cell biology, noticed that sight was restored. They could tell this was the case since the mice’s pupils contracted in bright light, and the mice showed light avoidance, a typical rodent behavior impossible without the animals being able to see some light.

“The photoswitch approach offers real hope to patients with retinal degeneration,” said co-author Dr. Russell Van Gelder, an ophthalmologist and chair of the Department of Ophthalmology at the University of Washington, Seattle.. “We still need to show that these compounds are safe and will work in people the way they work in mice, but these results demonstrate that this class of compound restores light sensitivity to retinas blind from genetic disease.” 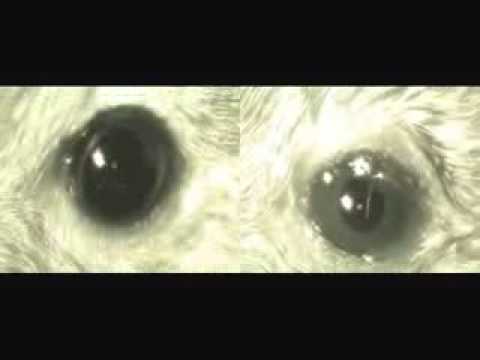 An alternative to curing blindness

The scientists involved in the study herald AAQ as a potential alternative to the current methods of restoring sight, deeming it safer because of its temporary nature.

“The advantage of this approach is that it is a simple chemical, which means that you can change the dosage, you can use it in combination with other therapies, or you can discontinue the therapy if you don’t like the results,” and perhaps with improved spectral or kinetic properties, Kramer said. ”

“A several month supply of AAQ could be packaged into an tiny device inserted into the eye cavity like those currently used for long-term steroid treatment of ocular inflammation,” the researchers explain in their Neuron paper.

This might just be an extraordinary advance in science’s long-lasting battle against blindness, and currently new versions of AAQ are being tested, which have already deemed better results. They activate neurons for days rather than hours using blue-green light of moderate intensity, and these photoswitches naturally deactivate in darkness, so that a second color of light is not needed to switch them off. “This is what we are really excited about,” he said.