by Bala Murali Krishna Yelchuri
in Animals, Environment
Reading Time: 2 mins read
A A
Share on FacebookShare on TwitterSubmit to Reddit

Hyderabad(South India): Indian Ocean continues to enthrall the scientists who take pleasure to unravel the hitherto unknown animal species lurking in the region which incidentally triggers monsoon spells across the globe every year.

Many biologists, including Indian scientists, had undertaken several voyages on the Indian Ocean and succeeded in their mission to detect many new species including crabs over the years. 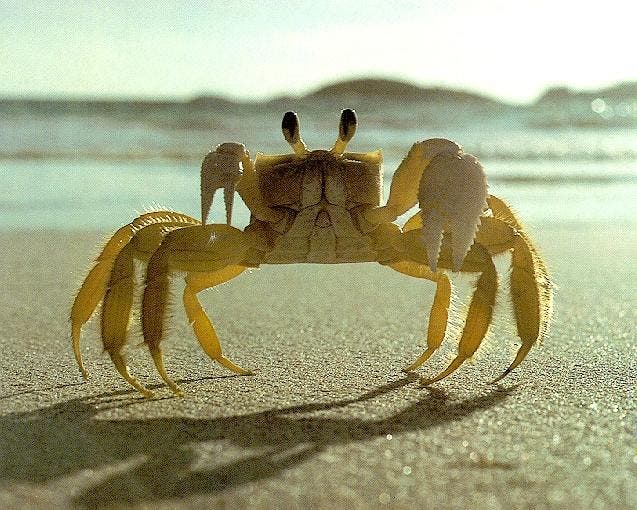 For Peter Ng of the National University of Singapore and Peter Davie of the Queensland Museum, it was a wonderful discovery of what they called “a new species of a bright purple, tree-climbing crab” in the Indian Oceans.

The species, identified as Laburnum vitatum was noticed in the Christmas Island, Nicobar Island, Nias and Java.

“It appears to be active only in wet weather and at night and to spawn during full moon cycles between November and April. When active, these and related arboreal crabs are encountered near the bases of trees growing along the seashore. The carapace of mature crabs can reach 40mm in width. Its ecological low profile, however, is only part of the story,” they said.

Meanwhile, Sally Hall, a doctoral student at the University of Southampton and the discoverer of the four new species of King Crabs opines that the oceans off eastern Africa, the Indian Ocean and the Southern Ocean are all particularly poorly sampled.

“We need to know which king crab species live where before we can fully understand their ecology and evolutionary success. We are only now beginning to understand the incredible diversity of animals living in the deep sea.

King crabs include some of the largest crustaceans currently inhabiting Earth. The new species, he discovered were Paralomis nivosa from the Philippines, P. makarovi from the Bering Sea, P. alcockiana from South Carolina, and Lithodes galapagensis from the Galapagos archipelago.

It is now clear that species of deep-sea king crab live in most areas of the world’s oceans, but many more species remain to be discovered. Much needs to be done to identify the species in the region, scientists admit.

According to an estimate, there are 6793 crab species of marine, fresh water and terrestrial sources had so far been discovered so far. Pea crab is said to be the smallest of the crabs in size as against the Japanese Spider Crab with 4 metres leg span. //eom//