Green cars – no longer the preserve of environmentalists

by Contributing Author
in Green Living
Reading Time: 5 mins read
A A
Share on FacebookShare on TwitterSubmit to Reddit

Advances in science technology and design in the last 10 years have made cars — especially stereotypical gas-guzzlers like 4x4s — into green cars, greener than could have been imagined when they first launched just a few short years ago. Relentless research into improvements for efficiency has transformed the idea of driving a low emission electric or semi-electric (hybrid) vehicle. No longer imagined as the preserve of sandal-clad, preachy environmentalists, it is now possible for a car buyer to choose a car for its performance, look, stability and fuel economy as much as its green credentials – choosing design over ‘green’ in some cases. The low emission car has never been more fashionable. 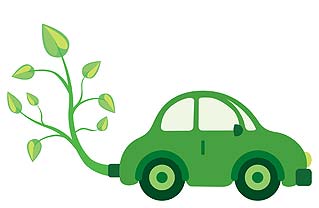 Cutting CO2 pollution, fuel consumption per gallon and streamlining with lighter more aerodynamic vehicles, low emission cars are becoming less harmful to the environment, as well as to consumers’ wallets in an age of global austerity. Reducing drag and weight and boosting all around efficiency is also crucial for green cars, with conventional cars also upping the ante for improving green performance.

If people were stubbornly looking to performance issues with driving rather than impact on the natural world outside of their car, they may want to consider this: money saving and environment saving are now both intrinsically entwined and are a combined result by the tweaks to the design and performance of low emission, hybrid and electric cars.

Hybrid cars remain the most popular in terms of converts and sales. They run with two engines, one petrol or diesel and one electric — the electric taking over at low speeds to save fuel and self-generating the power they need to charge their batteries through heat recapture when braking. Miles better than conventional cars, hybrids are leading the way for drivers to try out a more eco-friendly way of driving, and as the years advance design improves: performance, quality, speed and stability are all as good, if not better than previous cars of all sizes and performance levels on the road.

An added bonus of some hybrid cars (such as the Peugeot 3008 Hybrid4 and Lexus CT 200h Hybrid) that reach under the magical 100g Co2/km marker for a low emission vehicle is that UK drivers then pay zero road tax to the treasury. Drivers further benefit from not having to pay the London Congestion Charge — more incentive for consumers to swap their cars for new generation hybrids than ever before.

Leading the pack in the petrol and diesel hybrid field is Honda, who are about to unload a redesigned, sleeker and lower emission SUV vehicle than any previous models in their 160 country mass-reaching market. Boasting an aerodynamic rethink for a specifically European consumer base, this October, the brand new Honda CR-V will prove that a smaller, lighter, more efficient luxury 4×4 style vehicle is now more than possible.

Without sacrificing any space inside (in fact, managing to increase it) whilst building a smaller, lighter car, Honda’s utilisation and reworking of materials through scientific research has enabled this latest Hybrid to be the most honed yet — environmentally as well as in terms of efficiency. These advances have been made without skimping on high-end features that SUV drivers require.

Honda has also managed to devise engine refinements to cut CO2 emission measurements down a further 10 percent since the last CR-V model – an amazing achievement in such a short amount of time. The environment was a driving factor in the science behind the popular model’s redesign.
This improvement to the Honda CR-V’s fuel economy and reduction of CO2 emissions has been achieved without compromising any driving pleasure, according to the manufacturer. Even with “the power and torque outputs of the i-DTEC engine remaining at 150PS and 350Nm respectively, the CO2 emissions fall from 171g/km to 153g/km (10%) for the manual version, and from 195g/km to 175g/km for models equipped with the five-speed automatic transmission.”

With an improved Honda ECON mode and Eco Assist system, drivers will be even more aware of driving efficiently, be it for their wallets or the world. The end result is the same: we already know that the way we brake or accelerate and the speed we drive at all affect our fuel consumption. With the ECON button in the latest CR-V, the throttle response and air-conditioning will be automatically adjusted. The Eco Assist system display will show how driving style is impacting fuel economy by changing the colour of the dial edges from white to green when driving the vehicle at its optimum efficiency.

Small, simple details like this all make it easier for drivers to make a positive impact without having to over-think. Even small things help in the fight against high fuel usage and pollution to the environment with the added incentive that it saves money for consumers, too.

Obviously the ideal solution would be for everyone on planet Earth to give up driving; however, being practical, the development of green cars is an urgent priority for all global manufacturers. Low emission and lower fuel consumption vehicles have been developing and changing drastically, from hybrids to totally green, fuel-free Electric Vehicles (EVs) now coming packaged in all ways for all types of drivers: from the tiny city-practical Citroen C-Zero to the meaty expensive sportiness of the Californian Tesla Roadster, which by all accounts is like driving around as if on a real-life Scalextric track.

Winning awards for their green credits as well as for performance and usability, the latest generation of eco cars can suit most markets and types of owners. All of these realised visions of less eco-damaging cars available in 2012 were deemed mere fantasy 10 years ago, and this can only keep advancing to benefit individual drivers as well as the global environment. The green cars available now have never been so attractive and good for the eyes, the soul and the purse. Hip, green, lean and clean, the scientific and economic way to drive now and into a greener, more sustainable, less harmful future for the planet’s environment.