Eco Energy Lighting Up the Home 2012

by Contributing Author
in Green Living, Renewable Energy
Reading Time: 2 mins read
A A
Share on FacebookShare on TwitterSubmit to Reddit 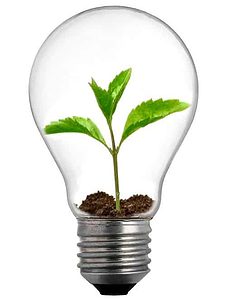 When it comes to lighting the home, lumens matter more than wattage. That’s a truth that people are coming to grips with manufactures change the labels on light bulbs to meet new energy-efficiency regulations. Consumers accustomed to equating watts with a certain amount of illumination are beginning to understand that the two are not intrinsically linked. New technologies are driving the point home, with lighting products that are exponentially more energy-efficient.
Many view these changes as coming in the nick of time. According to the US Energy Information Administration, lighting accounts for around 18 percent of the electricity consumed by the average home. In the very near future, everyone will be lighting their homes with light bulbs that save energy and that save money too.

Many people associate fluorescent lighting with the long tube lamps used in offices, but compact fluorescent bulbs, or CFLs, are intended to be used anywhere that a traditional incandescent bulb is used. CFLs use around a quarter of the electricity that incandescent use and last up to fifteen times longer. While more expensive than incandescent, CFLs pays for themselves five times over during its lifetime. One of the most recent products in the CFL market one that looks almost identical to a conventional bulb. The new 15-watt bulb offers the same illumination as a 60-watt incandescent and lasts 8,000 hours.

LED light bulb are even more energy-efficient than their CFL counterparts. They use around a quarter of the energy that incandescent use and last 25 to 46 years. While they, too, are more expensive than conventional bulbs to purchase, they more than make up for the investment over their 50,000-hour lifetime. Newer models use a combination of red and yellow LEDs to deliver the warm light that most consumers prefer for their homes. Using just 12 watts of electricity to generate illumination that’s equivalent to a 75-watt incandescent, LEDs are dimmable as well.

As lighting manufacturers continue to develop new CFL and LED products, it’s important for consumers to ensure that they’re getting the best value for their investment so use price comparison engines  to get the best deal you can. With comparison on shopping light bulbs, it’s important to compare lumens and watts as well as the prices.